My reckless and irresponsible lifestyle caught up with me again 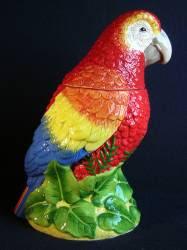 I left work early yesterday. I was walking around like a hunchback because of terrible stomach pains. Then came the fever and chills. I was green.

When I got home Chuck was on the phone. I heard him say, “Mrs. Mullet’s sick again. Me? I’m fine. Never felt better.” I think he even whistled.

I spent the rest of the afternoon curled up in a ball. In between bathroom runs and moaning, I did some Chuck hating. Besides his ass and kidney problems, the man is never sick, and it’s not fair.

I take vitamins. I eat fresh fruits and vegetables. Chuck lives on beer dogs and Ramen Noodles. I got plenty of rest. Chuck sleeps three to five hours a night. I brush my teeth regularly. Chuck brushes when it’s a full moon. I wash my hands like a good little washer. Chuck picks his nose, scratches his butt, rubs the bottom of his feet and then picks up a sandwich.

We both wear contacts. I wear mine for the prescribed amount of time. Then I dutifully rub them in fresh saline each time and put them in a clean case. Chuck sleeps with his contacts in, finds moldy cases, spits in the case, then plops his lenses in.

Guess who gets conjunctivitis and pink eye?

Then there’s Fred, Chuck’s parrot cup. He brings it everywhere. He never washes it. The thing has crevices that are growing bacteria that could be used for biological warfare. It’s slimy and filmy. When Chuck pours drinks into Fred, the liquid gurgles and foams. I daydream about bleaching that damn parrot.

Do you think Chuck gets intestinal parasites from it? Of course not. I swear, the man could lick the bottom of a flip-flop that had been sprayed with raw chicken juice and I’d get sick, just from watching.

Unless. Unless Chuck is the Trojan Horse of sickness. Maybe he’s the carrier. Maybe all those bacteria are partying it up in Chuck and looking for a fresh host. Chuck walks in the door, they see me and voila. Chuck the Carrier infects the poor, unsuspecting Mrs. Mullet.

I knew marriage would blow chunks.

Bottom of a flip-flop, sprayed with raw chicken juice? Where do you come up with this stuff?

Ever since the MHC complex was discovered (invented?) people have been wondering what purpose it has, other than making transplants impossible.

Recent research suggests that people with vastly difference MHC antigens are more attracted to each other.

So, obviously, Chuck has the good ones.

I knew you'd all take Fred's side!

Oh no! sleep with a lysol wipe blankee!

My husband and I have the same kind of arrangement sadly... He never gets sick and I seem to catch every blessed thing :(

You need a goat so it can poop everywhere and you can build up some antibodies.

Gross needs to be countered with gross.

What's your shipping address I have some spares.

I hope you feel better soon!

"I swear, the man could lick the bottom of a flip-flop that had been sprayed with raw chicken juice and I’d get sick, just from watching."

I am still laughing on that one!

(Giggle), I'm so sorry you're sick! He just has a great immune system from all the practice it gets..maybe you shld stop washing your hands! :)

i'm impressed that you could even write about the antics of chuck without blowing chow.

i am on your side!

Seems that you and the little boy ARE sick a lot--I think you are trying to be too clean--heard something on the news about that the other night. Or Chuck could be the carrier, which gives you a good excuse to stay away from him--whenever you want to that is.

i agree with you. what a butthead. where does he get off being all healthy and shit?

i'd divorce him.
theres other immuno compromised fish in the sea.

(see? this is me, taking YOUR side. hope you feel better.)

on the other hand- if he was a sickie, then you'd have to take care of him, and theres nothing worse than a sick man, is there?

maybe you should hold off on filing those papers.

I'm with twirl. Taking care of them is WAY worse than their healthy gloating.

You're too clean! Get dirty. You'll get sick less.

Yep. Pretty sure we are married to brothers. lol.

I hope you feel better soon. My guess is that Chuck never gets sick because beer dogs and ramen noodles kill everything.

I've got what you got but I didn't know it till I read this. It hurts to laugh but I did...bomits away!

Hello, I found you from Blogfrog.I'm following you now.

please join my community and visit my blog if you have chance for exchange our Quality time!

Have a great day.
Nan

You have a Typhoid Mary in your midst.

Ack. Does he at least clean up after you and watch the child while you're sick?

Oh, my god. Chuck is eerily like my husband Dave. He drinks from the same water pitcher day after day. Never washes it. Spends 90% of his time in our mold-infested basement. Nary a sniffle. He NEVER has to go to the doctor, whereas I, who eat healthy and exercise, average 6 appointments a month.

Having the stomach flu is worse!