Yo bitches, check out my daddy bling 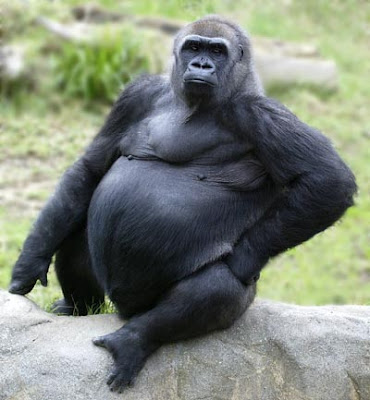 I almost died laughing this morning when I heard the NBC Today Show announcer exclaim, “Up next: The rise of the stay-at-home husband. Is this the new status symbol for alpha women?”

Since I had to drag my alpha ass to work, I was unable to watch the segment. But I did read it online.

As many of you know, Chuck has been a stay-at-home dad for a year and a half. Like the article states, there was a serious adjustment phase. For awhile there, I worried I might grow a penis and facial hair. I wished Chuck would get hit by a truck. I dreamed Chuck was riding bitch.

But never, EVER did I feel that “having a househusband may, in a way, be the ultimate status symbol for the successful professional woman."

Ah yes, my husband. He’s right up there with my Gucci handbag.

In the article, Diane Sollee, director of the Coalition for Marriage, Family and Couples Education and smartmarriages.com says, “In a way, it’s almost like bragging for a woman to say she has a stay-at-home husband. Not only is she the breadwinner...but she’s also got this highly evolved male person—a feminist, father, and husband who doesn’t care what the gender roles are. It’s really an elevated life-form.” For the hard-driving careerist mother, a husband who’s willing to take up the lion’s share at home is a godsend.

Just because a man stays home with the kid(s) doesn’t mean he’s stopped farting, scratching, picking his nose, eating his fingernails, leaving laundry on the floor, telling you it “must be that time of the month” because you have strong opinions, or walking around in his slouchy underwear. In fact, chances are your child and husband will spend entire days in their underwear.

Let’s not cream ourselves too much over daddy’s metamorphosis, k?

2. “For the hard-driving careerist mother, a husband who’s willing to take up the lion’s share at home is a godsend.”

Notice the key word “willing”? I love Chuck, but it has been a struggle of monumental proportions to get him to help more around the house. I’m not alone: Working women spend about twice as much time as working men on household chores and the care of the children, according to a recent survey by the U.S. Bureau of Labor Statistics.

When Chuck was first laid off, there were days I worked nine-to-five, cooked dinner, threw laundry in, tidied up and put Junior to bed. Chuck helped here and there, but one night I turned to him and said, “I just can’t do it all. It isn’t fair.”

I said it a few more times. Finally it sunk in. But dang, it was an uphill battle. I learned a valuable lesson. A man who sees his wife vacuuming will say, “Why don’t you take a break?” but he won’t get off the couch. A man who hears “I need help from YOU, buttfuck, yes YOU” 10 nights in a row will—finally, hopefully—get off the couch.

I guess that’s an evolutionary milestone.

Anyway, the article made some good points, but overall it annoyed me. So men are staying home with the kids. So what? Women do it all the time and no one's calling them elevated life forms.

Here's an article I'd like to read: Men and women everywhere get over themselves.
at August 10, 2010

Email ThisBlogThis!Share to TwitterShare to FacebookShare to Pinterest
Labels: evolution, laundry is the bane of everyone's existence

"Here's an article I'd like to read: Men and women everywhere get over themselves."

Hahahaha, I wish more people would think like you!

It amazes me that men are so glorified AGAIN for doing what women did for years - because it was expected of them.

If in a marriage SOMEONE is staying home to take care of the kids why does it matter if it's the him or the her?

Hmmmm, men are finally asked to do more than just mow the lawn at home. Amazing. Some actually do it. Even more amazing.

Why do we stare in awe that some guys actually get that they are 1/2 of a team?

I agree with you so much! My husband stays at home with the kids, but that's all he does. He takes his pillow from the bedroom ... puts it on the couch, and watches the kids while he is laying down until lunch. Then he'll make lunch ... and go sit back down on the couch. maybe the occasional vacuum, but seriously, I still do all the cleaning. your points are perfect!

Oh God, I saw this too! My mouth was agape. Who are these women she's talking to? I know several stay at home dads, and none of them do the "lions share of the housework". Somebody at the Today Show has too much time on their hands.

I didn't see the segment but I heard the teaser and I had to laugh. I know a number of women who have stay-at-home husbands and they still work way harder than anyone else I know. Where are all these husbands who are following the 50s wife model we all desire. I haven't met a single one.

Uh, what about her? She took time off, too, assholes.

If in a marriage SOMEONE is staying home to take care of the kids why does it matter if it's the him or the her?

Greetings! First time reader. I read through a few f your recent posts, we have some similarities...SAHD for Hubbies, snarky attitudes, living in the boondocks of CT. Congrats on your pregnancy. Looking forward to following ~

I laughed so hard at this. The fact they stereotype everything so easily and call it a big, grand awakening makes me want to barf. When my ex-husband stayed at home, we called it unemployment. We also called it that when I wasn't working, and even when I started working from home, my ex-mother-in-law liked to call it unemployment too. Thanks for making me laugh.

I love this picture, and your post. In general, I tend to stay away from those morning shows. They suck.

But then how many men that were home watching this will say "oh no she didn't just say I was evolved" or "what does she mean breadwinner" or similar? showing during his at home hours isn't going to help anyone.

My wife said that I'm real evolved and feminine and all that stuff, plus unbelievably good looking. And I will vacuum the fuck out of this house that I built for her.

Seriously, though, I'm ambivalent about getting credit for barely pulling off things as a SAHD that moms are supposed to do just as a baseline. On one hand, it's not fair to moms, but on the other hand, it really makes my job more pleasant to get the recognition (that I don't necessarily deserve.)

There has been a lot of online chatter lately about who does the housework--there was a controversial article on Slate right around Father's Day that some people saw as gratuitous man-bashing. And--here comes the plug-- I wrote a piece on Daddy Dialectic that got a pretty good conversation going. You should check it out. http://daddy-dialectic.blogspot.com/2010/07/who-changes-diapers-in-your-house.html

My wife thought it was a no-brainer that couples should share the housework, and thought my piece on Daddy Dialectic was pretty obvious, but judging by the tone of the comments here, it's still a contentious issue.

I've had a few days where I've attempted to take on the brunt of household duties for a day.... I usually manage little more than making sure there are no deaths. The house is a disaster, food is not ready, the dishwasher is half full, and don't even think about the floors being vacuumed.

I don't think I'm qualified for the position.

“I need help from YOU, buttfuck, yes YOU” 10 nights in a row will

That is so true and funny. It doesnt' even occur to them to help out thus the sledge hammer approach must be used. I gave up on that dream long ago. I don't think i would feel that way though if he wasn't bringing home a paycheck.

It's interesting to get some male perspectives, especially when they admit they aren't scrubbing the floors 24-7. LOL.

You are right. They don't stop farting and scratching and picking their noses - they TEACH that to the kids. Along with peeing outside.

I can't even relate to this. I've sat here trying to come up with something witty to say and I got nothing. My ex didn't do much when it came to housework. He cut the grass, shoveled and did some cooking. It wasn't much, and he did work full time, but then so did I, but it was way better than having to do it all myself like I do now.

Men have had "trophy wives" for centuries.

I just can't help thinking that if the smart, career-driven woman decided she wanted a 'trophy' husband, he'd probably be just as bad at the housework and child rearing as most trophy wives are.

But great looking and good in bed. That's something, anyway.

Since I had to drag my alpha ass to work, I was unable to watch the segment.

And I'm there with Pricilla. When a woman does that there's not story. But when a man jumps into the fray (even to watch his own children while his wife runs to the grocery store) it's an effing miracle.

Yes...it does seem that men get all the attention for suddenly doing what women have been doing for years...whatever!

The things I miss by not watching network tv... Elevated live form. Yeah... What's that make us? Goddesses of course. Sounds like some working woman was just kissing ass in a big way to appease her husband. Or just sell the story. Cause that kind of journalism gets people to read.

Basically, people will right anything to make themselves feel better. [You know I'm talking about the elevated life-form comment, don't you?]

I just love you. While neither of us are SAH_'s, we have different days off and therefore each stay home with the baby on our "weekends". And even *that* apparently qualifies my husband for a medal. Where's mine? I don't ship the baby off to a sitter on my days off either! *stompingfit*