Which side of the rope are you on? 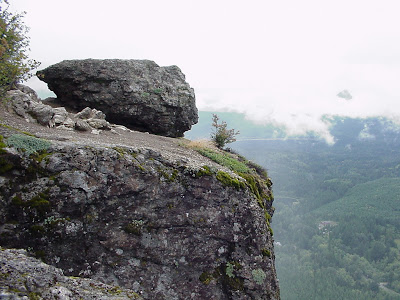 Before my maternity leave and when I was working full-time, it always bothered me to hear stay-at-home moms say, "I'm so sick of my kids." The women who bemoaned days at home and summer break because their kids were around all the time seemed, to me, to have a lucky problem.

Claiming you're sick of your children is a luxury; it denotes an abundance of time spent together. An overabundance, some might say.

As a working mother, I didn't have that luxury.

Now, after five months of being home full-time with two children under the age of five I can honestly say that I've reached the point at which I could pull out my hair and cry, "Make them disappear!" I know what it feels like to be eaten alive. There's no off switch for Junior's mouth. He questions everything. Diddly wants to practice standing and to see the world. He grabs for everything.

And for God's sake I can't count the times I've had to poop with both of them sitting in the bathroom with me—Diddly in the bouncy seat and Junior (who doesn't want to be left out) sitting on his stool, as if they're audience members at a silent and awkward show.

The thing is, they're happy sitting there. They're happy to do anything, as long as it's with me.

It's bittersweet then, this summit I've reached of I-need-a-break-they're-suffocating-me. I always wanted to be here because it's born of bountiful time together, but it won't go on forever. I only have two and a half months of maternity leave left. For a lot of women, especially those in the United States, they've had far less time than I.

I know what you mean! I am/was lucky enough to work out of my home office when my girls were little - I had to hire a nanny for that time but I could see them and spend time with them.. which was good. Now that my girls are teens and a nanny is not needed - I find myself really at the end of my rope... but in all - I'm glad I was lucky enough to be around and spend as much time with them as possible.
I've Become My Mother
Kelly's Ideas
Amazing Salvation

Sounds like you just need a bit of a break. or you'll break.

I hope it gets better and you can find your balance

Needing a break is normal. I was home with Turbo for 15 months when he was first born. I waited every day for Nick to come home so I could talk to someone who could form whole sentences. And I felt it was a luxury to shower without the audience.
Now I'm working and don't see either boy as much, but there are still times when I have them both in bed at night and sigh in relief. Being mom demands so much.

I've been where you are at. When my little one was born I stayed home 8 months with her and my oldest. 16 months separated them. Some days I was all "touched" out. I just needed my space. It was bittersweet going back to work and I remember those days with happiness. The crappy days seem to have been forgotten. Big hugs and you can do this.

I've been a SAHM since my oldest was born. The boys are now three years old and 20 months old, and there are times when I just put them in their room behind a baby gate, just so I can pee or poop in peace. Yes, it's great for them that I'm home, but I'm not so sure it's great for me. I'm reaching my breaking point, too!

I have a little boy that is almost 3, a baby girl that will be 1 in July and due to a failed IUD, I am due on November 14 with baby #3. I know exactly how you feel. I also have the awkard little shows in the bathroom (At this point, I don't think it's awkard anymore, LOL). My sister sent me the link to your blog and I am thankful. I really like your posts.

There you go, talking about poop again. Just when you swore you wouldn't...

I've been a SAHM for almost 12 years and while I've never gotten tired of listening to women bemoan the balance of work/family, I would have to say, I've been jealous. I wanted to say, "I would give ANYTHING to talk to an adult, not have to wipe someone else's boogers, and go to the bathroom by myself!" I often want to punch my husband when he complains about his hard day at work, knowing he had a business lunch, paid for by work, that included "happy drinks".

I think being a SAHM is not a one-size-fits-all job. Some take to it like a duck to water. For me, I feel like I've had to grow into it. Only for about the last 3 years have I felt okay about it. I finally feel like taking care of others and putting myself last isn't going to crush me. It might cripple me for a while, but I won't be dead.