Llamas do too moo 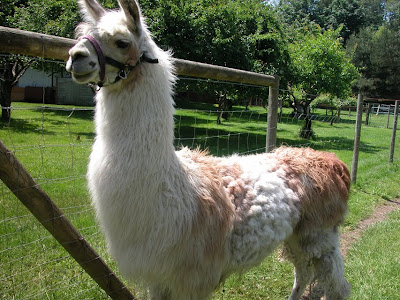 The other night, my good buddy D&W and I visited a polygamist sect housed in a lovely barn. Twelve modestly dressed women sat in chairs on either side of us. The head lady sat directly in front of me. The women eagerly answered questions and giggled at each other’s responses. There were homemade lemon bars and fresh goat’s milk. Peace flags hung from the rafters. A llama mooed outside the window.

Oh, dang. Did I say polygamist sect? I meant to say Montessori school. Snap! It just felt like a polygamist sect—minus the men and merry-go-round vaginas, of course.

I swear I don’t mean to be unfair. The teachers were lovely in that granola and beeswax way. They were polite and smart and had dewy skin. But after two hours of learning about the Montessori method, I was a little freaked out.

Ok, a lot freaked out.

First, by the use of the word “work.” According to the head teacher, children don’t come to school to play, they come to work. They choose their task of the day—which can be pouring water or counting beans—and spend time at their station working on it.

Even as I write this, I’m sweating and starting to whimper, “Nooo, God, noooo, nooooo!” But that’s because of my own connotations with the word work. In my life, work is something I have to do. I drag my ass out of bed every morning and dutifully punch my timecard. I’m lucky in that some components of my work—graphic design—are things I’m passionate about, but let’s be honest. Some days work eats my soul.

So when I pictured Junior at his station working, I got claustrophobic and twitchy.

One of the teachers noticed my facial tick and explained that the school wants children to see work as an impassioned activity. Kind of like how she sees her weaving. I get that. But I can’t move past the fact that I don’t want Junior working at the age of three. Maybe this is my own personal failure because I let Corporate America rape my inner weaver on a daily basis, but it’s a huge hurdle I can’t jump.

Then there’s the independence angle. Holy shit. You’re not even allowed to go into the classroom because it interferes with your child’s ability to remove his own shoes, hang up his coat and choose his day’s work. You say goodbye at the door. Every activity fosters independence. Even snack time. It’s eaten alone when the kid chooses. All in the name of I CAN DO IT MYSELF.

The more the women talked, the more vivid my mental movie became. By the time they offered us the damn lemon bars, this is what I saw:

After two years of Montessori schooling, Junior comes home one day and announces he’s getting his own apartment. He’s landed a job at a local farm counting beans. Chuck and I have to acquiesce: he’s perfectly capable of living on his own. Chuck and I cry our hearts out. Our house fills with tears. The cats drown. We cry more. Our house floats down the street and into an intersection. It’s smushed by oncoming traffic. We’re smushed. Junior’s agoraphobic tendencies prevent him from attending the funeral. He’s riddled with guilt. He turns to drugs and alcohol. He’s in juvie by five-and-a-half. All because we chose to a Montessori school.

Wait! Wait! If you’re a Montessori lover, don’t be mad. I’m sure there are many of you who have had fabulous experiences with Montessori schools. Maybe this one was just a little hard core. I mean, the way the head directress spoke about the school’s founder, Dr. Maria Montessori, I was expecting them to wheel out her taxitermied body so we could kneel before it.

And to the parents who brought their bug-eyed kid to the open house? The invite said the evening’s activities were “not appropriate for children.” Because of all the, you know, bed hopping stuff.

Oh my! You made the experience sound so fun!

I finally bit the bullet and enrolled Jesse in preschool. I went with the Christian preschool program a block from my house.

Good luck with your search.

Shoot. I thought this was actually going to be a post about a polygamist sect.

Have I ever told you that it is my one dream in this world to start my own polygamist compound/utopian society?

Keep trusting your gut. My first thought was: If your going to send your kid to work every day, then THEY should be paying YOU, right?

Did you know, that at least in the state of NJ a Montessori teacher does not have to have any accreditation to teach?

Did you know that a teacher who took and failed the NJ state teacher's test 4 (count 'em, 4) times could then go and teach at a Montessori school?

Noting that I am a goat and never was a teacher I will not tell you how I came to know this. But all of my brothers married erm, teachers.

Who knew finding a pre-school could be so difficult. I don't have to do it yet, but now I'm a little scared.

Is Junior supposed to know if he wants to be a teacher, doctor, or a farmer by the time he's 4?

I'd really like to hear more about that polygamist sect that you were talking about at the beginning. Montessori scares me. I know many who've loved it but I wouldn't touch it with a ten foot barge pole wrapped in a condom.

Thanks for the lovely entertainment this evening... I need that.

I know people who have done Montessori and loved it. The schools in the Small Town are not so hard-core, we have the Waldorf schools for that. Our local Waldorf school doesn't teach kids to read until 2nd grade and doesn't allow families to have plastic toys or TVs.

We put our daughter in a Montessori program when she was 2. Although I'm sure for some kids it's a good fit, it didn't work for us and by 3 we had taken her out.

Good luck with your continued search!

You said everything I have always wanted to say about Montessori but was afraid I would get my ass kicked by some chick who hadn't shaved her arm pits or legs ever. I looked into the whole thing when my son was young but just couldn't go that direction. It might be fantastic for other people but it was not for me.

I'm a pretty big fan of the Montessori method, at least for the preschool years.

All things kids do is work. They learn about the world through everything they do.

I was thinking - do polygamists sects really hold Q&A sessions? how fun is that!

It is one of those places you can go but not practice their methods? like a catholic?

hi! i stumbled upon your blog and you crack me up! your depiction of the montessori school being like a polygamist sect is classic! Thanks for the laugh :)

One of them is 7 months old and her mother always talks about what the kid "did in school today." I want to scream, "Shut the hell up, lady! You're taking your kid to day care! 7 month old baby's who can't even roll over are not enrolled in school! Who the hell are you fooling?!"

But I'm a much nicer person than that, so I don't.

Forgive me for possibly being an idiot but don't you generally want to send your kid to preschool so they can learn to socialize appropriately? Share, give and take, learn about team concepts? That's what I thought anyway.

Ouch, so this one's a no go, huh? I'm not sure I'd be into a school that discourages parental interaction. Seems counter intuitive to me. Do they offer Koolaid at individual snack time?
Are they allowed to work with other kids, or are they afraid they'll all get together and rise up against nap time?

I have never heard of this but your description makes me think it is flat out crazy. Kids shouldn't work. I don't care what the meaning is. They can learn things but working is a little too much for me. The mental picture of a cat drowned by tears made me laugh. I could be a troubled person.

I just thought of the scene in A Christmas Story where Ralph comes home blind and the guilt kills their parents... but in reverse!

I believe in independence, but not before I am ready to kick the kids out of the house and make their room a reading/sewing/whatever I want room. Until then, the work will be at MY house, so I can eat bon-bons and watch TV.

Ok so help me out here, what exactly is a montessori school?

As I have never had this choice to make, I can only tell you what I saw on TV only last week.

A couple who had brought their kids up in this way, had to go for help because their children became so independent that they ran the household completely! They did just what they wanted, when they wanted and the parents couldn't control them at all.

That was a great read!

I thought about Montessori when The Girl was young and I just couldn't wrap my head around it. Plus, it was VERY expensive.

But, I would have liked the meeting just for the llama mooing. And the lemon bars.

My three-year-old pretends he's Indiana Jones 10 hours a day. It's a job to him, I swear.

I don't know if I'd trust him to be the boss of himself all day, I'd be a little hesitant myself.

Although they might have won me over with the goat's milk and lemon bars. I have always wanted a sister/wife.

I swear I did NOT read this before I finished my post and I'm laughing because we're both like, "I mean, no offense if YOU like Montessori, BUT..."

PS: My friend actually called me after reading this and said, "You know Frogs in my Formula??" Yer like, famous.

Exactly why my kid won't go to one of these schools. Yikes. Yikes and more yikes.

Holy crap your writing is always spot on and so funny.

(I almost wrote "your righting" I need coffee...if only I wasn't allergic to caffeine. What a freaking crappy thing to be allergic to!)

Merry-go-round vaginas - what a picture!

If your little cat drowning house floating vision is any indication you might want to find a different school.

We passed on Montessori too. When we went for the tour all the kids were shining silver. Yep, all shining teapots and forks and knives and stuff. I thought it was a great idea until I heard they wouldn't do my stuff. Shoot.

It was really weird here too.