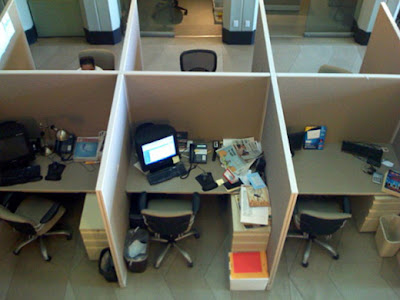 Listen, you little recent college graduate buttwads. I’ve been working with some of you since May, when you were lucky enough to land a job in this piss poor economy, and I’ve come to a realization: Aside from a select few, you’re lazy, coddled whiners.

As a seasoned professional, I’d like to offer you some free workplace advice. Unless you’re happy with your inauspicious beginnings, which I suspect some of you are, it would behoove you to heed my advice. I’ll try to make it as easy as possible for you to understand with some text-speak, since I know your robotic brains can synthesize little else. Ready?

1. You need to CTS (Cut the shit)
It’s not okay for your boyfriend/significant other to stop by the office every day during business hours and to talk for hours. You can see him during your allotted break, which is called your lunch hour. It’s bad enough your boyfriend can’t pull up his pants and we have to look at his bunched-up boxers. Do you really think we find your giggling and blushing marathons endearing?

2. IBYNTP (I’m begging you not to procreate)
Do not tell me you stopped taking the pill because of, like, wicked cramps. First, that falls under something called TMI, or too much information. Second, you’re asking me to add my .02, which is that you should keep taking the pill because, with his pants down around his ankles, your boyfriend seems primed to inseminate something. Please, for the sake of humanity, don’t take a chance on that being you.

3. IWKY (I will kill you)
Just because your brain cannot function without technology does not entitle you to simultaneously watch Youtube, update your status on Facebook, send emails, instant message and talk on the phone while you’re working.

You’re sitting in a lifeless gray cubicle because you have a job to do, and—news flash—that job doesn’t entail being entertained. And I swear, if one of you little assholes gives me another irritated look when I remind you to disconnect yourself until your work is done, I’m going to strangle you with one of those old-fashioned phone cords.

4. URNMC (You are not Miley Cyrus)
This is a place of work, not a strip club or rock concert. We don’t want to see your bra straps, underwear, pajamas, miniskirts, concert t-shirts or sweatpants. And thigh-high boots? Really?

5. GAFC (Get a fucking clue)
If you see your supervisor sitting at his/her desk around 12:30 and they are chewing something, chances are that person is in the throes of what is known as a working lunch.

I’d like to suggest that you GAFC and leave that person alone for the next 15 minutes. Do not, I repeat do not, pull up a chair and start asking questions like, “When are raises done?” or “I know I only started two days ago but can I have Friday off so my friends and I can go to Vegas?”

6. GTFU (Grow the fuck up)
Business hours are called such for a reason. Don’t show up an hour late and expect the office to be sympathetic because you’re “not a morning person.” Many of us barely slept because of crying or sick kids or because we were trying to squeeze in a quickie with our partner after remembering it had been several months.

And for the love of all that’s holy, don’t raise your hand during a staff meeting and suggest we change the meeting time to later in the day because you have trouble concentrating before 10 a.m.

7. N1W2CURDSF (No one wants to see your damn smiley faces)
Professional emails do not include emoticons. I cannot stress this enough.

8. GOVAY (Get over yourself)
If your work is mediocre, I’m helping you by telling you that.

I know you grew up during a time when the whole team got medals and when your parents sung the praises of every piece of macaroni artwork you brought home, even though you ate the glue instead of actually using it, but this is the real world. We don’t do a dance when you poo. We don’t care about your fragile ego; it’s not our fault you were overparented.

And finally, I hope there are better role models in 2020 so he understands the value of a good belt.
at October 25, 2010

Email ThisBlogThis!Share to TwitterShare to FacebookShare to Pinterest
Labels: it's only Monday, SMS, text messaging, twenty-somethings are runining my workplace

Isn't that the truth?

Some study made headlines last week that adversity is good for you. Huh, who'da thunk? The sad part is that it made national headlines.

Amen! I work on a college campus and wonder about some of the 'students' I see wandering around. They would never make it in the real world.

Funny and yet serious at the same time.

They're the generation after Gen Y, Millenials, and they're unilaterally like that. The sad part is that if you fire them because of their behaviour, it won't teach them anything, because they're completely convinced that they're entitled to a good job (and NOW), and they'll just whine until they get one.

BTW - Why haven't you tweeted this? I tweeted, FB'ed and Stumbled it - really good post!

I really hoped that after they left middle school, all of that would change. I am sooooooo glad I am not a student in these days. I thought maybe college life still resembled something as I knew it. I don't know how you put up with it.

Yup yup yup! LOLing at grabbing a quickie cause you remembered it had been months. Been there.

Sadly, I experienced similar problems (not the facebook et al) with my new hires in the '90ies. Seems times have not changed much for youngsters.

I feel like the last generation to have a work ethic.

So glad that I don't work where you do. I actually might kill one of them :( Sigh...

I totally agree. But, when Junior fails at something or is told to try harder, and comes home crushed, I am just warning you now: you will want to KTPA (kick that person's ass). I always said that my kids would need to learn the hard lessons of life, but when they actually started learning them, it crushed me. It hurts like a MF to see your kids in pain, no matter what the reason may be. Even if it's good for them. Even if they did it to themselves. I usually put my brave face on, then later go in the bathroom and vomit or take a handful of chill pills.

I had to quit working because each and every hour of the day I had it in my mind to just go up and slap one of those damn kids. Didn't want that to happen 'cause I would have been the one at fault. Pissants--that's what they are.

And in a downsizing economy, my personal favorites

i've never really worked with unprofessional people. My first "grown up" job was an accounting firm. hmmm - now that I think about it - maybe I was that person.

Hallelujah Sister! I work with a ton of 20 somethings and it is AHHHMAZING the conduct the have in the workplace? With all the crap my generation got about being a big load of slackers, it's unbelievable to me the lack of perspective and work ethic these "kids" have.
Bless you, bless you....you have vented my frustrations for me!
Best,
Tina

Texan Mama, are you saying I'm going to EMW?

Couldn't agree more! You're hilarious, but these are issues that need to be addressed. Entitlement is what makes me SICK. They just don't understand that you weren't born on third base, you have to hit a triple to get there. Of course, that works both ways... Sometimes the people who ARE born on third base try and act like they hit a triple... either way, it makes me sick!
Kids these days.

Amen, sister!
I don't work outside the home, but I totally hear where you are coming from with the abundance of "overparenters" out there!
Funny stuff, but totally true.
:) (Can I use an emoticon in my comment? I couldn't resist..)

That was well said. And SUPER funny.

I once overheard my oldest on the phone (I won't pay for texting on her phone because I want her to pay attention to the world around her, namly me, her teachers and her boss) - "yeah, that won't work. My parents live in reality"

I don't even know what she was talking about or to who, but I don't care. It was a proud parenting moment that I hope somehow translates to her not SUCKING at her first real job.