And where the heck are the chickens?

"Chuck, honey? I'm in the mood for barbecue chicken. Can we fire up the grill?"

"Don't tell me we're out of propane!" 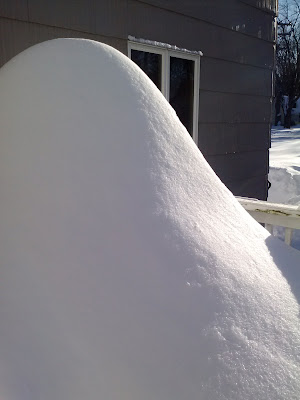 Email ThisBlogThis!Share to TwitterShare to FacebookShare to Pinterest
Labels: Blizzard of 2013, can't find the grill, lots of snow, lots of snow in Connecticut

My gawd we're finally better. It took almost two weeks but we've all joined society again. For the first time since I've had kids, I actually was thrilled to get out of bed (usually I'm clamoring to get back into it) and put on actual clothes.

We let the kids watch a disgusting amount of TV while we were sick. I'm usually super vigilant when it comes to limiting TV time, but I was too ill to care. From the confines of our bed (seriously, we just laid on each other, whimpered and slept), life was a steady stream of Curious George, Thomas the Train, Arthur, Martha Speaks, and more Curious George.

Oh, and we did let the kids watch a few movies on Netflix. Yes, after scrolling through the "So you're fucked up from watching cartoons and need a movie with real people" category, we decided on Santa Paws, a G-rated movie with this description: "Magic dogs and an elf team up with two children to rescue Santa who has lost his memory." It had this cover: 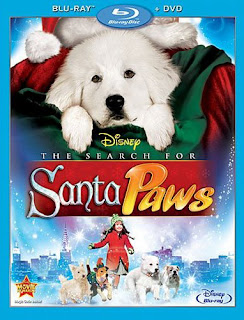 I assured Junior it would be just as fun and happy as that stupid monkey and the talking dog. I promised him, "It's a happy movie about puppies and Christmas. Fluffy puppies, Junior!"

Fluffy puppies indeed. The movie opened with a little girl getting dropped off at an orphanage.

"What's an orphanage, Mom? Why is she crying? Her parents are dead? She doesn't have a mom?"

"Hang on," I said. "It gets better." Chuck shrugged his shoulders.

We turned back to the TV. After getting dropped off, the little orphan girl learns that the mean woman who runs the orphanage hates toys and dolls—and that if she catches any of the children with toys or dolls she will burn them in the basement's incinerator. Guess what the newly orphaned child is hiding in her pocket? A stuffed angel given to her by her mother.

Even Junior could see where this was going.

He clutched his puppy and cried, "No! Turn this off. Please!"

"Just give it a few more minutes," I said. "It has to get better. It's a G-rated movie from Disney. There's a puppy in it. A happy little puppy." I looked over at Chuck with a what-should-we-do look but he was comatose again.

We carried on. A few minutes later, the mean woman who runs the orphanage finds out that one of the children has a doll. She confiscates it and puts on the incinerator's conveyor belt. We watched in horror as it fell into the fire and burned to a crisp.

"Noooooooo!" Junior cried."Turn it off!"

Then I fell out of bed and crawled to the hallway, where I cursed Disney from the safety of my floor (who can stand after puking for two days?). Shouldn't the movie's write-up mention a toy-killing incinerator on the cover? Surely Disney, who devotes millions of dollars to market research and focus groups, understands that the most coveted items of children in the G-rated age group are stuffed animals, lovies and other security items.

And there you have it: after going to two wakes for family members in December, seeing another beloved family member undergo open heart surgery, hearing about Sandy Hook and learning that innocent children died, and seeing our cat sick with a visible tumor, guess what's keeping Junior up at night?

Fucking Santa Paws. Junior won't put down his stuffed dog. I caught him whispering to it, "I would never let anyone take you." He needs the comfort, and the dog seems to need it too.