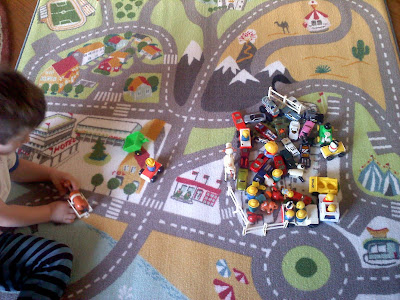 Had I known about this rug from IKEA sooner, I would have done my whole living room in it. The kids have spent hours playing on it. Hours.

They're not the only ones who have been enjoying it. 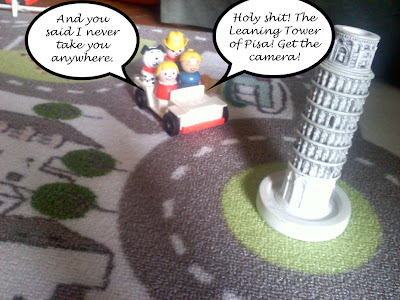 It's so nice to see the little limbless people happy again. They've been through so much, you know. First they were liberated from Mulletville Lite. Then they were un-liberated.

(Is it weird to say I'm jealous they get out so much?)

Flushing that mom guilt down the toilet

Everett took his first steps this weekend. He'd been standing on his own and balancing for a few weeks, so we knew it was coming (unless, of course, he was going to grow up to be one of those weird lurkers).

Chuck and I were sitting on the living room rug. Everett was standing against Chuck. I held out my arms to Everett and said, "Come here! You can do it!" and he did.

There are a few things that are remarkable about this milestone. One is, of course, the act itself. He's walking. This changes everything. Another is that Chuck and I were both home to see it. That was thrilling. It was one of those Hallmark-y, picture-perfect moments you get as a parent from time to time.

(As opposed to being called over to marvel at the contents of the toilet bowl.)

What stands out most to me about Everett's first steps is this, though: With your second child (at least for me), all the anxiety of those "firsts" is gone. It doesn't matter what month/week/time of day it is when the milestone is reached. He/she got there in his/her own time.

There is no competitive awkwardness with my mother over who sees what first.

There is also no self-inflicted anxiety, guilt, or anguish about worrying I might miss a "first." Along that same line, there isn't the cause and effect relationship between that anxiety and the ensuing anxiety that I a) suck as a parent or b) have missed a crucial developmental milestone in my child's life and that our bond will somehow suffer as a result.

Nope, I know better now. I know that if I miss a "first" there will be a second, a third, and even a fourth. And if I miss those too, I am there every night for bedtime stories, and holding hands at the doctor's, and bike rides to the park, and pancakes made into the shape of a dinosaur (type thing).

I am there. I know it, and they know it.

Your children fart. They burp. They pick their nose and expectantly hand you their nasal treasure. They vomit on you. They pee on the floor and sometimes, they even poop in the tub. They whine and scream and ask a million things of you as you valiantly (and futilely) juggle another million things.

Sometimes those things land on your foot.

They cry about raisins. They demand popsicles. They expect timely service.

Then one night, you go to the store to buy bird seed and you see a gray cat lying on a shelf right above you and you freeze. It looks exactly like the cat you had to put down the summer before.

The teenage shop worker catches you, choked up and sniveling, as you try to pick out bird seed. You lamely tell him that the store's cat looks like your own cat.

You say you're all set. You leave the store. You don't tell anyone.

That night, as you are putting your child to bed, out of nowhere he says this:

"Mom, the cat said something to my brain tonight."

"He said thank you for taking him to the vet that day. He was in a lot of pain and now he is running around in Heaven and he's happy."

You tell your son that that is a wonderful thought to have in his brain. You hug him, and he is toothpaste and sunscreen and spring sun and a small warm back, and you fall in love all over again with life and love.

Email ThisBlogThis!Share to TwitterShare to FacebookShare to Pinterest
Labels: children have a way with words

I love to play

The blog game of "Where was I last year at this time?" It tickles me to no end. And I don't even need machine guns to play it.

So where was I last March 16? Losing cars and vomiting dots.

My aunt has continued her dot streak. Look what she did for Junior's belated Christmas gift: 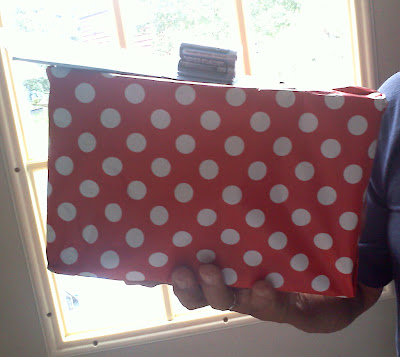 The crazy thing is, it looks like she was a year ahead of the trend: 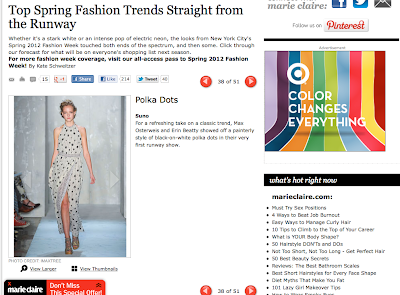 The more I see of the dots, the more the look has started to grow on me. 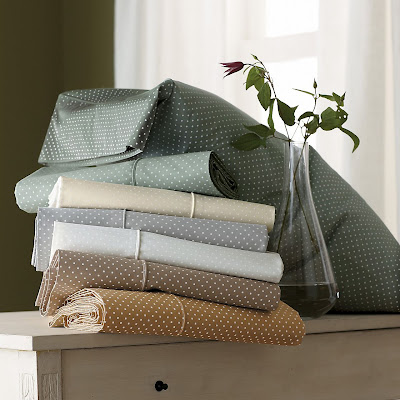 Heck, I even read an article detailing the history of the dots. And now I've gone and written a post about dots.

I called out sick today so I could buy myself a new keyboard. Until yesterday I hadn't realized just how crucial the space bar is. (If you, too, need proof see my last post.)

One of Junior's friends accidentally broke his Mator from Cars during a playdate, so I promised Junior a replacement the next time we were out. We stopped into the Disney store, and Junior grabbed a new one.

I was so distracted by Everett's fussing and the super-duper-uber friendly salespeople that I didn't notice until after we got home that the version of Mator Junior had chosen included machine guns strapped to his sides. Oh, and a button that makes a machine gun sound.

You're fucking kidding me, right? This is the new Mator? 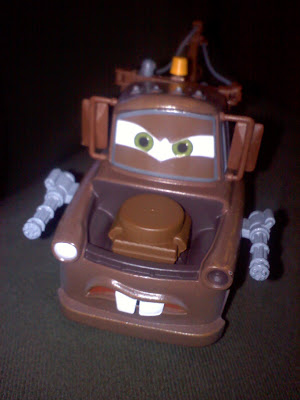 What happened to this guy? 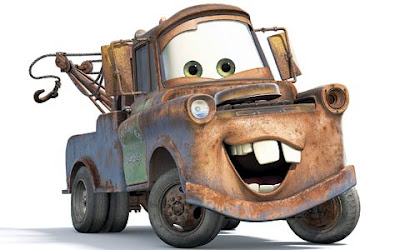 Damn that Cars 2. Damn it to hell. After I saw the movie (which includes machine gun battles, torture, and bombings) I actually went and checked what a G rating stands for. In case you're wondering, like I, it means a movie "contains nothing in theme, language, nudity, sex, violence or other matters that, in the view of the Rating Board, would offend parents whose younger children view the motion picture."

It continues: "Depictions of violence are minimal."

I'm on the floor laughing. Seriously, I'm going to split my sides. Can you hear me?

Truly, I have no other explanation for why Cars 2 (and other alleged "chidren's" movies) have been given a G rating. Even stupid Ratatouille, which I bought for Junior because it seemed safe, was rife with violence. It's supposed to be about a rat who dreams of becoming a French chef! What could be more innocent than that? 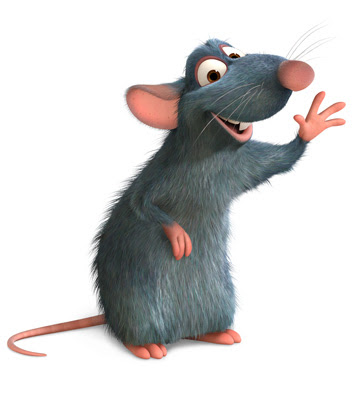 On its packaging, Disney forgot to mention the homeowner who shoots up her house—in the opening scene no less—with a double-barreled shotgun to rid the place of rats.

And by "shoot up" I mean she LEVELS the place.

What really pisses me off is that up until Cars 2, Junior had had limited to no exposure to guns and the statement "I want to kill you" (thank you, Ratatouille). I'd kept him from guns not because I am a prude but because I am lucky that killing and violence have not been a part of my life, and I'd like to keep it that way for my children.

Did I expect it to last forever? No. Do I understand that playing things like Cops and Robbers, and Cowboys, and Bad Guys vs. Good Guys, and Superheroes can be part of a normal, healthy childhood and that these role-playing games can include aspects of violence? Of course.

But dammit, if G stands for Guns, Guns, and More Guns! in a movie, label it as such. Stop peddling these grotesque, malicious stories under the guise of being child friendly.

I wonder about a Rating Board that approves such apparent violence. I wonder about people who craft movies for children that feature killing sprees. I wonder why words like kill, shoot and torture need to make a home in a four-year-old's mind.

Most of all I wonder this: Just what are we trying to prepare our children for?
at March 13, 2012 9 comments:

Email ThisBlogThis!Share to TwitterShare to FacebookShare to Pinterest
Labels: Cars 2 is too violent, G rating is bunk, kid nightmares, rating board is made up of idiots

Email ThisBlogThis!Share to TwitterShare to FacebookShare to Pinterest
Labels: computerwoes

What it really feels like to be a working mother 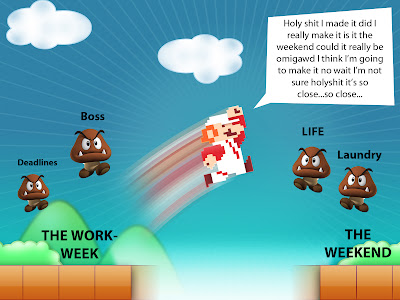 Isn't it the thought that counts?

There are few people I work with whom I genuinely like. My co-worker Ellen is one of them—mainly because she saved my life.

Ellen fell ill a few weeks ago and needed to take an extended leave from work. She wasn't answering her cell phone and she doesn't have the internet at home so I've had to rely on rumors of her return.

When I first heard "Today's the day!" I ran out and bought her a wad of flowers, which I planned to give to her, along with a card, when she returned. I wanted it to be a surprise because as we all know, flowers given on the fly supertrump flowers given with advance notice.

Alas, today was not that day.

Each morning, there was rumor of Ellen's return. Life started to follow a strange little pattern.

"Today's the day!" someone would announce confidently. I'd grab the wad of flowers and diligently walk it down the hall, up the stairs, down another hall, through the jungle, down the elevator, and across the courtyard. (Uphill both ways, I tell you!)

No Ellen. The door was locked. The light was off. Nuttin'.

I'd clench the wad and diligently walk it back across the courtyard, up the elevator, through the jungle, down another hall, back down the stairs, and back down the hall.

Day after day, no Ellen.

Still, I continued to rely on the news from my fearless co-workers—"Today's the day!"—and take my daily pilgrimage with the damn wad. People started to chuckle and joke that I had adopted a plant and was now intent on taking it for a daily stroll, but I didn't care. I didn't want to call ahead to see if Ellen was in. I wanted to surprise her.

Finally, finally, today (!) Ellen was at her desk. She was pale and wan and laden with floral arrangements like a damn beauty pageant winner but hooboy, was she ever surprised to see me and my wad.

It wasn't until I handed it to her that I realized it was dead. 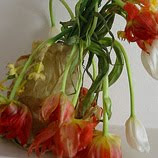 I walked back to my office. Mission accomplished.

Then, just as I was about to bite into my sandwich a co-worker popped her head in the door.

"Can you believe someone gave her dead flowers? I threw them away! The woman's been sick for God's sake. What does that say?"