Packing up, moving out and moving on: When your baby isn't a baby anymore


When my sons—there's three of them—were newborns and sleeping in a bassinet in our bedroom, I kept a little plastic tub at the end of the bed. I filled it with everything I'd need when they woke up in the middle of the night: diapers, wipes, onesies, bibs, footie pajamas, pacifiers, diaper rash cream, extra nipples, gas drops. It saved me from having to search frantically for things when I was half asleep and they were fussy.

I never really emptied the tub in between kids. I just pushed it to the side (and eventually under the bed) and refilled it when I had the next kid. I know it might sound weird that it contained items from nine years ago—when Junior was a newborn—but it was a comfort thing. Like look, I don't have any more babies but I have this little tub of newborn stuff and that's kind of the same.

Further down that thought train was this: When I have time to sit and cry and reflect on the fact that I no longer have a baby in my life, I will empty it.

Then last night, my best friend let me and Chuck babysit their two month old while they went to dinner around the corner. The kid was a piece of cake, but my friend was gone from 7:30 to 11:30, and I'd forgotten how all consuming a baby can be. Cam plays by himself now. I don't have to carry him everywhere. He feeds himself. I don't have to burp him or rock him to sleep.

Simply put, I have a bit of freedom in my life again. More of me.

This baby...he wore me out. Chuck too. After my friend picked up her baby and said good-bye, I felt wonderful. I grabbed Chuck and said, "Thank you for agreeing to have a third child, but I officially know that I am done with babies. I don't have baby fever. I don't long for a baby. I am ready to move on with my life."

I went upstairs to grab the heating pad from the closet for my shoulder—holding a baby for four hours hurts—and that's when I saw it: the little plastic newborn tub. It was sitting there on the shelf. For the first time in nine years it was empty.

I ran downstairs with it. "Where did everything in it go?" I asked Chuck.

He told me that barf pans were getting scarce when we all had the puke bug and that he had dumped the contents of my little baby tub onto the floor in a moment of barf pan desperation and let someone yack into it.

I waited for the pang of sadness. I had had ceremonious plans for that tub! I had planned to sit down and go through all the leftover newborn items and have a good cry. That act was supposed to be my official good-bye to babyhood.

But the truth is that every day that Cam, Everett and Junior have grown is a step in the good-bye to babyhood direction. And the good-bye isn't just a one scene act. It's a process—one I had unknowingly started a long time ago.

I remembered what I had said to Chuck just minutes before.

I don't long for a baby.

I went upstairs and put the empty tub back into the closet. I stared at its...emptiness. The Universe had confirmed what I knew in my heart—I am ready to move on with my life—and even better, the Universe had let my husband do the dirty work of emptying it.

I went back downstairs and lay down next to Chuck. We were asleep in five minutes.
at February 20, 2017 No comments:

Email ThisBlogThis!Share to TwitterShare to FacebookShare to Pinterest
Labels: babysitting a newborn, no more newborns for me, when you're done having babies

If you're thinking of having a baby, or if you already have children and you think you may want more, I want you to click on the image below and watch the video.

A friend forwarded the link a few days ago with the message "So cute!" but when I watched the video all I saw were squirming toddlers. And then suddenly I was everywhere I'd ever been trying to hold my very mobile toddler, Cam (who now weighs almost 30 pounds). My older son's karate class; the mall; the grocery store; Mystic Aquarium; the driveway.

Just watch it—and remember: Your baby will turn into this. Without the fur or snout. Obviously. And you won't be wearing a mask or gloves. Unless that's your thing. Because I don't judge. But I do offer free birth control...in the form of baby pandas. 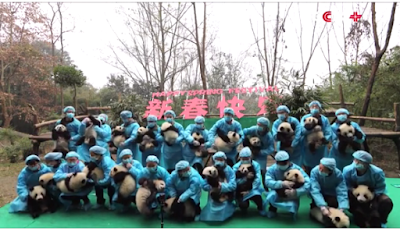