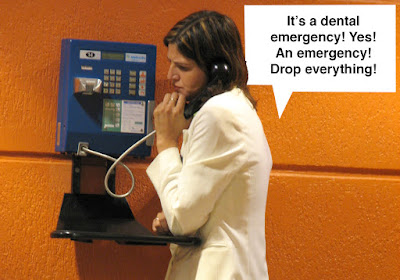 I've been thinking about going back to work full-time instead of cobbling together my income with 7+ freelance jobs, part-time work and curating the Crazy House, aka our loving homestead.

Now that Cam is three and in preschool part-time and the older boys are in school all day, it kind of makes sense (except the part where it's, um, summer). Plus, I kind of have co-worker envy. Like, when I see people in suits having lunch and talking shop, it makes me nostalgic for my Mulletville Corp days. Kind of.

When I mentioned my feelings to a friend, she said she knew of an opening at a small ad agency a few towns away. I immediately took this as A SIGN and took my business suit to the drycleaners (it's been sitting in a closet since 2003 and yes, it kind of fits).

I sent off my resume and got a call for an interview.

Chuck and I spent hours pre-gaming it. What would the salary have to be for us to afford more childcare? What about my freelance clients? Would we have a million people in our home, like before? Who would keep the dog and cat company during the day?

A few days later, I arrived at the interview. The interviewer—let's call him Mr. Gray—was in a meeting, so I sat on a dinky couch in the hallway and waited patiently. The waistband of my suit was cutting into my stomach and causing gas pains, but I sat there smiling anyway.

Finally, Mr. Gray called me into his office. It was decorated starkly in red and black. The tall windows were screaming for curtains, blinds, bamboo shoots—anything!—but I got it: He was aging and trying to project a minimalistic, masculine vibe.

We sat smiling awkwardly at each other. Then Mr. Gray casually informed me that the position I was interviewing for no longer existed and asked if I would be interested in a special part-time position.

I was about to ask what happened to the full-time position when he asked why I was currently freelancing and working part-time. I explained that it provided a certain amount of flexibility.

"I have children," I said, "but with all three in school in some capacity or another..."

"Yes, three. I have reliable childcare and..."

Mr. Gray smiled and shook his head knowingly. "Mothers are a special group," he said.

This is where it got strange.

He picked up the black office phone and pretended to take a phone call.

He hung up and smiled. "You see, when a mother gets a phone call, it could be anyone. It could be a sick child. A sick husband. A grandmother. A doctor. A babysitter. A dog walker. A school. A dentist. And so we have to be careful about what we ask of mothers. Because so many people are relying on them."

I mean, how would that phone call even go? "Mrs. Mullet! It's Dental Dick. Even though you're at work and your children are all at school, I randomly looked at an xray from 2002 and discovered all three of your children are missing their second mandibular axis points! Can you leave work right now and pick up your three children and be at the dentist's office in three minutes? It's a matter of life or death! You defintely should not be working full-time!"


"You have wonderful experience," he said. "I'd like to offer you a part-time position, Mrs. Mullet. But before that I need to ask, are you able to take phone calls at 7 o'clock at night. Because sometimes I need to call people at 7 o'clock at night and I know that that must be dinnertime...which I imagine is quite hectic."

Was Mr. Gray brothers with the archaic ear doctor I'd visited years before? Did people really still live with such antiquated ideas?

"Before I make you a firm offer," he said, "I need you to submit a writing sample. I'll email you the details."

My jaw was still on the floor as I left. I should have told him where to stick his writing sample. I should have asked him, What if my dentist and you both call at 7 o'clock at night?? How will my overburdened little Mom brain handle it?

Instead I'm sitting here blogging about it. Because I'm kind of better at after-the-fact comebacks. And because I'd kind of rather spend my time blogging than submitting a writing sample for a company I'd never want to work for.

Email ThisBlogThis!Share to TwitterShare to FacebookShare to Pinterest
Labels: freelancing vs. working full-time, you can work and have kids
Newer Posts Older Posts Home
Subscribe to: Posts (Atom)