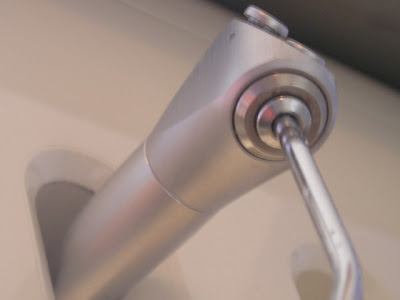 I didn’t even know dentists had their own offices until the hygienist told me the dentist wanted to see me—in his office.

I’ll be brief. What transpired was this:

Him: “Are you under a lot of stress?”

Me: “Kind of.” (His office was very Holiday Inn-esque; I was trying to look around as inconspicuously as possible.)

I started to wonder if my dentist was moonlighting as a shrink. When the hell do dentists do anything other than breathe on you and force you to look up their hairy nostrils while they manhandle your chompers?

“Let me tell you about stress. I just saw a woman whose house is in foreclosure. She’s about to lose her job. Her husband’s got cancer. Her son is special needs. Her mother’s got onset Alzheimer’s. That is stress.”

Was he saying my stress wasn’t stress-worthy enough? I was about to rewind and elaborate on the specifics of my stress—surely something in my grab bag of worries was worth something!—when he whipped out something that looked… dentically disgusting.

“Your gums are receding. Badly. Do you grind your teeth?”

“—You need to start wearing a bite guard at night. Right away.”

Oh, Mr. Dental Man, I had been down this road before. The last time I had said yes to one of your counterpart’s insidious contraptions I had ended up with a jaw widener affixed to the roof of my mouth. My poor mother had had to turn a little key every night—a key she almost always dropped down my throat—that widened my jaw while I leaned over the back of the couch. At the time someone had suggested a water pick to freshen it; instead it shot darting bursts of water at my tender gums, bursts that sometimes hit me in the eye.

Hah! Foil me again will you.

I crossed my arms and leaned back. He and I both knew that part of the fun of being an adult was saying no to dental work.

He looked crushed, no joke; his emergency bite guard intervention had failed.

On the way out I racked my brain for something devastating to share with him—something that would make him feel like crap for not appreciating that my stress was mountainous and deserving of his empathy.

But, lucky for me, I couldn’t think of anything. So thanks, Dental Dick, for making me realize that my life is just peachy.

Email ThisBlogThis!Share to TwitterShare to FacebookShare to Pinterest
Labels: I had to go to work after that

LMFAO
Dental Dick...
I am frickin crying over here...
I like my dentist a lot, we always spend good time catching up...maybe all his other patients are asses...

but I still cant wait to call him Dental Dick.

Guess what. I shall have them all removed and replaced with dentures. If one feels like grinding one's teeth, one removes the dentures and thus cannot grind.

We already put your kids through college. You will never put your hands in my mouth again.

I'm so happy people are fond of Dental Dick. Perhaps he can date SuperMom.

My last encounter with our Dental Dick was his request that I spend $1,200 filling the cavities that he "thought" were forming between my daughter's teeth. She was 4 at the time. These were baby teeth. They will fall out anyway - who cares? He tried to make me feel guilty stating that she might have a difficult time eating if she didn't have all of her teeth. Well, she's well past 5 now and I wish I could slow down the inhalation of food at this point. Dental Dick - Aye Aye!

Well Damn. I don't understand why he felt it necessary to tell you about someone else's stress. He doesn't know you like that does he? And the guard might be a good idea, receding gums doesn't sound like something to play with. Perhaps another dentist is called for.

OMG--that is just hilarious! You really have a way with words. Hope your gums stop receding and your stress starts receding!

p.s I think I have met Dental Dick before. Maybe a brother?

My husband and I are laughing over here, too! "One of the best things about being an adult..."

Once a dentist recommended complicated oral surgery for my TMY. Another dentist filed one of my teeth down with a metal file. It cost $15.00. I've never had another problem with TMJ.

You see? I can probably buy a better toothbrush for $5 and solve the problem myself.

This is a funny one! Interestingly enough, when you mentioned the shrink bit, did you know that dentists actually have one of the highest suicide rates among doctors? I found that surprising as well! Well, he obviously isn't (a shrink), he broke rule number one and did NOT validate your feelings! :) Stress is stress!