In defense of adoration—even in the deli line 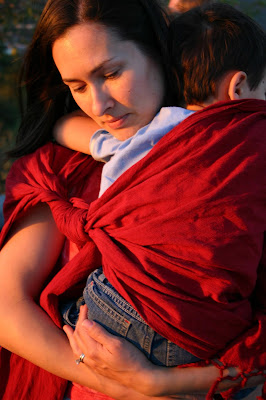 The toddler was all over his mother. Cam and I were in line at the deli at Mulletville Lite's town grocery store, watching the lovefest.

"I love you SO much, Mommy!" the boy was saying. The woman was visibly pregnant, holding him on top of her bump. "I just LOVE you!" He took her long hair and pulled it under her ears and chin. Every time he leaned in to nuzzle her he said, "I just love you SO, SO much!"

Isn't that sweet, I thought.

Wow, I thought, that kid has it bad. Stalker bad, but still sweet. Cam is affectionate–all three boys have been–but he's not one to fawn. His toddler love is quieter, softer. This kid was IN LOVE.

After more swooning, the mother put him down to give the clerk her deli order. Soon enough they were on their way, hand in hand. As they walked down a far aisle, out of earshot, a woman in her early sixties (late fifties? Hell, I don't know) leaned into the woman next to her (older again, graying hair) and said, "I don't miss that stage one bit."

The other woman replied, with a haughty scoff, "Me EITHER!"

I wondered about the exchange the whole drive home. I had expected the women to say the opposite, that the toddler's professions of love were precious/endearing/blah blah blah but nope. They were all set. I remembered a woman I'd run into weeks before at the playground. She looked absolutely traumatized by the sight of my three kids.

"I have one," she said, "and I can't handle it. He touches me constantly. He has no boundaries."

She confided that she was in therapy because of it. Because of the unwelcome physicality of motherhood.

I guess I'd never thought about it, but it's true: Children touch you constantly, and if you're not into it, you're just not into it.

There have been times when I haven't wanted someone on my lap or hip or leg. Absolutely. Space is limited when you have kids. But it feels good (better at least) when the clinging is accompanied by confessions of adoration, right? It's the sweet spot of parenting. It helps temper all of the whining and meltdowns and tears and vomit and bodily fluids and colds and potty training accidents and vomit...

Oh wait. I said that already.

But right? Isn't the closeness why we have children in the first place? Doesn't it stem from love and a desire to share love?

Or am I completely naive?

I wanted to fast forward 20 years, to see if maybe I'd feel that way someday—relieved it's over—waiting in line at the deli. We're expected to feel a sense of loss when our children don't need us anymore. When they're grown and gone, we're supposed to bemoan our empty nest, hunger for visits and contact. For confessions of love—when maybe all we get is a monthly phone call. Could that ever be me, I wondered. Relieved that the emotional intimacy of my children's childhood is all over?

I don't know. I keep thinking back to a conversation I had this week with my mother and Cam.

He shrugged sheepishly and, in his little two-and-a-half year old voice, said, "I just have my mom. I just love my mom."

Email ThisBlogThis!Share to TwitterShare to FacebookShare to Pinterest
Labels: it's good to love your kids, when kids love their moms and dads
Newer Posts Older Posts Home
Subscribe to: Posts (Atom)