I may just eat the whole damn cake

Well, it's that time of year again, aka, my birthday.

Last year I compiled a list of my birthdays and noted how many of my children were sick on each birthday. I really only did that so someday, when my children start showing me convalescence home pamphlets and dropping hints, I can pull up my handy list and tell them to go to hell.

This year, in a bout of optimism I haven't experienced since I was a virgin, I made plans for me and Chuck to spend the day at a local spa. It wouldn't cost a damn cent thanks to a mountain of spa gift certificates I've amassed since 2007, the year Junior was born (and consequently, the time in my life people started assuming I was a stressed out mother and needed a day at the spa).

Things were looking so good! I booked the sitter. I walked around all day with a kick in my step. My sweet mother, who is under the weather, dropped me off a cake and said, "You look happier than I've seen you in awhile!" Then she started hacking and excused herself.

But, children. They pick their noses and sneeze on each other and lick each other's faces. They are vile creatures. No sooner was Everett was off the bus than he said, "I don't feel well." His face went white. He asked for the puke pan.

He has a fever.

So I canceled our spa reservations. While I was waiting for Chuck to get home from work, I opened up my pretty birthday cake and cut out a huge ass piece. 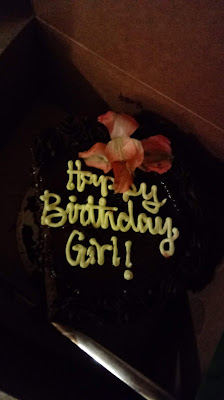 I may just have invented a new tradition.
at January 04, 2019 No comments:

Email ThisBlogThis!Share to TwitterShare to FacebookShare to Pinterest
Labels: another birthday, being a parent and having a birthday
Newer Posts Older Posts Home
Subscribe to: Posts (Atom)