How to play bad kitty (but not at work!)

We've been sick. All of us. I believe it happened the minute I hit "publish" on my last post. Stomach bugs, colds, pink eye—you name it we've had it. Standing in line at CVS yesterday I had that shell-shocked, wide-eyed stare of someone who's lived as a hermit for too long.

I hate when that happens.

Weeks ago I'd wanted to write about how a friend of mine hated my last post—"Why don't you tell your husband and kids to pick up after themselves?" she'd spat—but in hindsight, that post probably would have been mind numbingly boring (and yes, defensive).

I do remind my husband and kids to pick up after themselves but let's be honest, spouses and children are imperfect creatures. Sometimes you end up bending over and picking the damn sock/crumb/remote/pants off the floor because it's easier.

I guess if your shit doesn't stink that doesn't happen in your home.

Anyway, it's been dicey trying to keep the TV from scorching the walls because it's been on for so long. What does one do with kids when both you and they are sick and it's -15 degrees outside? I'll tell you. You can:

Myah, I'm actually serious about the cat headband thing. I grabbed it in a moment of desperation (kid meltdown #30? I'll try anything) and it quickly became an hour-long extravaganza now known as Rabid Cat. It's good fun—even better with a dose of DayQuil. Well, it was fun until I grabbed for Everett's leg—"MEOW!"—and he tripped and fell into the coffee table. Thankfully he's so desperate to leave the house he'd limp out of here if he had to.

Me too. I'm going into the office tomorrow for the first time in two weeks. For once I'm glad for my hour commute. I can mentally prepare for all the bustle. Wear real grown-up clothes. Drink coffee without someone dropping a Matchbox car into it. 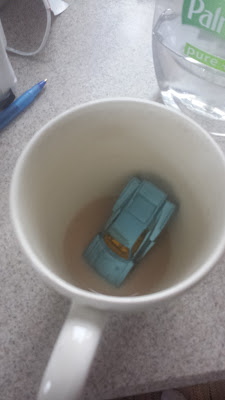 I just have to remember to take off the headband.

MEOW! (Try it! It gets the ticker tocking!)