Chuck and I celebrated our tenth anniversary last weekend. Ten freaken years. That's a lot of dirty socks under the bed. I mean, love notes on the fridge.

My mother offered to babysit so we could go away for the weekend. Isn't she amazing? Seventy-two and still as sprite as ever. Remind me to send her something.

After belaboring options (could we really fly to Bermuda and leave my mother with three kids? Should we just rent an RV, park behind a gas station and catch up on sleep?), we settled on Salem, Mass., a walkable, low-key, and bewitching—har, har—city.

If you've never been, I can't recommend it enough. We ate a seafood dinner on the water, shopped, drank way too many Moscow Mules, poked around a flea market, stayed in the cozy guest house of the Hawthorne Hotel (the shower was in the closet!)... 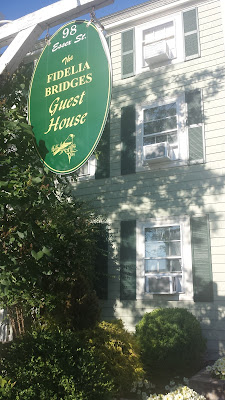 ... slept late, ate dinner at 11 p.m. (to soak up all those Moscow Mules) and of course, because Chuck is a somewhat retired ghostbuster we went on a Haunted Footsteps Ghost Tour.  It was seriously spooky. And look at what I caught on camera! 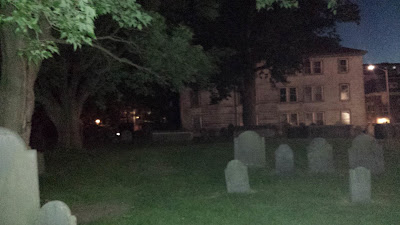 Myah, nothing but a cemetery—but it was still spooky. In fact, after Chuck and I sneaked behind that abandoned building in the background to swap spit (thank you, Moscow Mules) and heard twigs cracking underfoot right next to us, we raced back to catch the tour. (Fine, only I raced.) When I told the tour leader about our possible paranormal experience, he congratulated us on possibly having an encounter.

Chuck and I arrived back home in Connecticut refreshed, albeit slightly hungover, and lighter (but not translucent or surrounded by orbs, those are important distinctions). Which brings me to the point of this post. It actually isn't to hawk all things Salem (I'd go back in a heartbeat), but to acknowledge something that, in my opinion, is rarely said: Children can be a marriage killer if you let them.

Yes, you can go there—it's kind of impossible not to—but you can't stay there if you want your marriage to make it.

Until last weekend, I'd forgotten how much fun Chuck and I had had before we spawned. We must have logged 10,000 miles walking around cities, arm-in-arm, half in the bag. Those are some of my most favorite memories. And duh, those are the memories that made me say "I do" in the first place.

I love you. And yes, if you need to start ghostbusting again you have my blessing.*

* I don't really mean that but in the spirit (HAH!) of this post I thought I should make it look like I'm a supportive spouse.
at June 22, 2016 No comments: Links to this post

And on Sunday night in the driveway...


Everyone had meltdowns last night. The cat was even off.

It had been a busy weekend, and by 7 o'clock everyone—including me and Chuck—were cooked. I felt badly handing the kids over to the sitter, but it was almost bedtime and Chuck and I seriously needed some adult time.

Everett took our departure the worst. He held onto my leg and begged me not to go. The sitter scooped him up (this move should be mandatory in sitters) and suggested they play Candy Land. Thankfully he obliged.

We made it to the car and were sitting in the driveway, engine running, when Junior raced outside. I sighed, exasperated. Chuck shook his head. What now?

Junior motioned for me to roll down the window.

"I have to tell you something," Junior whispered.

"Hurry up," Chuck said tersely, "we have a dinner reservation."

"I know how Everett feels," Junior said into my ear.

"About what, honey? We're running late. Please just spit it out."

Junior sighed, annoyed with us for rushing what he apparently felt was a monumental declaration. "Everett is crying because when you're gone, it's like our comfort is gone! And it just hurts a little. Even though we know you're coming back. Our comfort is gone. That's why we cry."

He kissed my cheek and ran back into the house.

Chuck and I sat there.

"It's, like, harder when they can talk," Chuck finally said.

"Yes," I said, swallowing the lump in my throat. "It absolutely is."

Respect isn't just a lesson for our sons

I'm sorry I've been gone for so long, but I've been busy with work, kids, a stomach bug, Chuck's kidney stones, Cheerios in my hair—you know, the usual.

I typically don't comment on mainstream news because, quite honestly, I'd rather keep things on the lighter side on this blog (and when the hell is mainstream news light?), but as I was scrolling through my Facebook feed this morning, I noticed a trend: Several of my friends had posted Scary Mommy's blog post, "Rape Culture Starts As Early As Middle School" followed by the battle cry, "TEACH YOUR SONS TO RESPECT WOMEN."

Obviously, their posts were in response to the Stanford rapist and his fucktard father and the two men's complete disregard for the victim and the trauma she's endured.

But let me tell you, when you write TEACH YOUR SONS TO RESPECT WOMEN, you're also speaking to me. I have three sons. I'm someone who is allegedly responsible for raising a boy who may or may not rape. And before you put all the impetus on me, or Chuck, or any of our sons' kin, there are some things I'd like you to know.

Before I get started, let me say this in the clearest way I can: I am not defending Brock Allen Turner or his unconscionable behavior, nor am I saying that women ask for it. If, during this post, you start to forget that please scroll back up and reread this.

Every day, I struggle with how to teach my son to respect a sex that doesn't always respect itself—and if you don't believe me, just look around. Half-naked women are everywhere: billboards, magazine ads, television ads. Look at the strong, positive role models for young women. Right, there are none. Kim Kardashian? Miley Cyrus? Mainstream society is little more than an ongoing smut-fest.

As such, Chuck and I have consciously tried to shield our sons from it. We've only allowed the kids to watch PBS Kids. We don't subscribe to racy magazines. The kids only watch G and PG movies. Hell, we only listen to NPR. Junior's learned more pop-culture songs at school than he has at home.

Sometimes though, we stick our toe in the water, just to see how bad it is—just so our kids have some clue about mainstream society. We don't want them to feel totally isolated (or ridiculed).

So...we tried to let the kids watch the Superbowl last year, but we had to turn it off during halftime because Beyonce ripped half of her clothes off. Bruno Mars was able to keep his clothes on. New Year's Eve shows weren't much better. Kathy Griffin disrobed. Anderson Cooper did not.

"Why do women always dance in their bathing suits?" is a common question my eight year old, Junior, asks. "Why do they always dance like that?" (He means hump the air/gyrate/writhe on the floor.)

What's the lesson here when we leave the safety of PBS? Women take their clothes off. Men do not—unless they're playing sports.

My mother recently bought me an Elle magazine (because of an interesting article), and Junior flipped through it as it was sitting on the kitchen table.

"Why don't women ever have any clothes on?" he wanted to know when he saw all the ads. He was genuinely perplexed. "You wear clothes, Mom. Do women who have children just keep their clothes on?"

"I know! They want to be sexy!" Junior cried.

"Any why do they want to be sexy?" I asked innocently.

I have my work cut out for me. I won't have my children forever. At some point they'll eschew what Chuck and I say and form their own opinions. Hell, they've already started. But I will continue to be that voice in their ear that tells them that women are not just eye candy, despite what society leads them to believe. When they're old enough I'll make sure they understand that women aren't just there for men's pleasure. That as men they can't just take what they want.

I will say it every day if I have to—not because I think they'll forget, but because shitbag parents like Turner's father, the mainstream media and this valueless society we live in will tell them otherwise.

You tell me, TEACH YOUR SONS TO RESPECT WOMEN. I tell you, I AM TRYING. But you, you have to meet me halfway. You have to TEACH YOUR DAUGHTERS TO RESPECT THEMSELVES. Teach them that Virginia Woolf didn't advocate for a room of her own so she could take naked selfies and post them to Instagram. She believed women had more to offer than that. I know that, my sons will know that.