I put stuff up my kids' noses, but it's really quite brilliant and it goes well with celery

I'm still moisturizing, you know. Still trying to get that lovin' feeling from Josie Maran's pure argan oil. I have to be honest, it's a pity fuck at this point. Slathering it on, waiting...hoping...waiting...

Thank the Heavens I have my three children to distract me from my all-consuming skincare regime.

Take this morning. Junior, now almost 12, woke up at 5:45 a.m. and started whimpering, "Help me" from the bathroom. He's in the tweenager stage, where things that happen in the bathroom are TOP SECRET and must take place behind closed and locked doors, so I was surprised he was calling for me.

When I went in, it looked like a crime scene. His bloody nose had exploded all over the bathroom — the walls, the floor, the cabinet. He hung his head over the sink and asked me for help.

I was half-awake and grouchy. Cleaning up someone else's bodily fluids isn't my favorite way to start the day.

"You know what I'm going to suggest, right?" I said.

"I'm not using one of those!" he grumbled. "I know what they're really for!"

"They're perfect and you know it," I shot back.

He reached for the toilet paper roll, grabbed a wad of paper, and tried to sop up the blood. But because we are cheap and enjoy wiping our butts with sandpaper, we have industrial grade toilet paper, and the absorbancy was like...like trying to catch spilled water with a broom.

I reached into the bathroom cabinet and pulled out this: 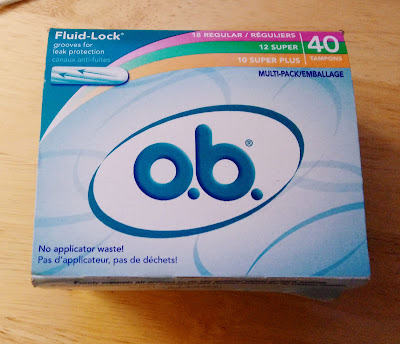 If you think about it, tampons are the perfect solution to nosebleeds. They fit easily inside your nose. They're absorbent. They have a string, so if you stick one too far up inside your nose you can easily pull it out. And, if your kids get nosebleeds a lot, like mine do, it saves on paper towel, toilet paper and tissue consumption. One tampon is equivalent to like three boxes of tissues.

Good for moms and the planet!

If you're going to go this route for nosebleeds, I recommend a few things. First, use practical terminology when you introduce them. The first few times I presented the tampons to Junior, at age seven or so, I called them "nose-bleed stoppers." As in, "Gee, Junior, another nose bleed? The doctor recommended these awesome nose-bleed stoppers. Want to try one?"

(He was suspicious, but soon came to see their absorbent prowess.)

Second, start your kids off young, before they go to health class and learn about human anatomy. That's what killed it for me: the damn middle school teachers who decided it was time for everyone to learn about the human body and puberty. The nerve. I mean, Everett, my eight year old, still thinks I have two butts. And I intend to keep it that way.

Third, be prepared for some backlash at some point — namely right after middle school health class comes along. I'll never forget when Junior stormed into my room in sixth grade and said, "I know what you put in my nose!"

"Do you mean the nose-bleed stoppers?" I'd asked innocently.

So ok, Junior was mildly pissed at me for awhile, but I take this morning's incident and Junior's acquiescence as proof positive that this parenting hack is sheer brilliance. I mean come on, these nose-bleed stoppers are so absorbent your child can snack his way through a bloody nose. 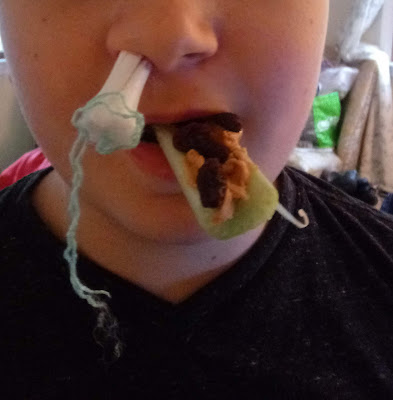 Was that too much?