Forget bedroom eyes, take II. The proof's in the...thing on the dish rack? 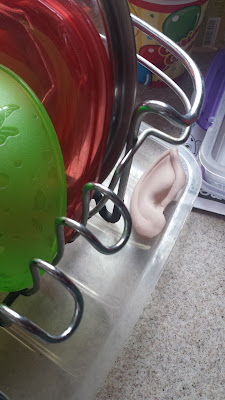 There's been a Spock ear on the dish rack for two weeks now.

I don't know how it got there. I mean, I know I had a brainstorm last September to throw Chuck a Star Trek-themed surprise birthday party (he's been told he's part alien, remember) and that I had the idea way too close to his actual birthday to actually pull it off but that I tried anyway.

And I know that I ordered 20 Spock ears from Party City way too late for them to arrive on time but that I paid $25 in expedited shipping on the off chance that the force would be with me—oops, wrong star thing thingie—and that they'd come in time for the party.

They didn't. The party was on a Saturday. The box of Spock ears came on Monday.

Then things got busy and the box of Spock ears got pushed to the side. Eventually under something. Somehow the receipt got separated from the box and by the time I was able to remarry the two, the window had passed to return the damn ears.

"Fine," I told the kids. "You can each have two pairs. But we're saving the rest for another occasion."

That immediately earned an enthusiastic nod from Chuck, who I know was imagining us having kinky Vulcan sex.

Mums the word on that, but I will say that the Spock ear extravaganza lasted for all of five minutes—I don't mean you, Chuck!—and that soon there were lone Spock ears all over the living room.

How this one migrated to the kitchen is beyond me, but I'm leaving it there. My reasons are simple:
1) I really hope the mother ship beams me the eff up so I can get out of doing the dinner dishes
2) If I don't move the damn ear, will anyone else?
3) If Chuck really was the die-hard fan of this blog that he proclaims to be, he'd remember pony-tail- means-sex girl and he'd snatch up that ear and start sending me signals 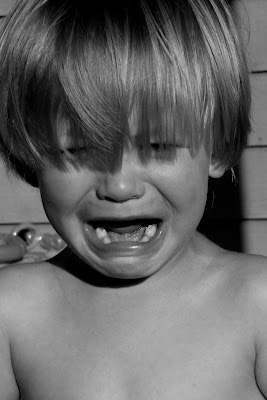 My husband Chuck held Junior, Everett and Cam constantly when they were babies. He fed them bottles. He slept with them on his chest all the time. (Seriously, the man logged more nap time than anyone.) He changed their diapers—sort of. He has this annoying habit of pretending to be grossed out by bad smells, so diaper time sounds like this:

and after listening to this overly dramatic gagging enough times I usually just grab the baby and shout, "Oh Jesus, give me the kid, I'll do it!"

Even though Chuck was always hands-on—he was a stay-at-home dad with Junior, for Pete's sake— something tragic happened after the kids turned two. They suddenly wanted nothing to do with him and everything to do with me. If Junior caught me talking to Chuck he would scream, "Don't talk to him!"

Everett wouldn't let Chuck brush his teeth or put him to bed. Everett would stand at the top of the stairs and scream bloody murder if he even saw Chuck coming up the stairs at bedtime.

With both boys Chuck would try different tactics. He would tickle them or ignore them or try to make them laugh, but nothing worked. They would always run for me. Chuck would throw his hands up in the air and say, "I'm done" and skulk off. I was left holding a crying toddler, feeling like absolute scum.

I had hoped things might be different with Cam. Chuck never had a daddy's little girl; maybe Cam would be the one who preferred Chuck to me. I hoped and hoped and...

Myah. Nope. Nope. Triple nope. As Chuck puts it: "It's like he suddenly hates me."

Cam will actually point to Chuck and yell, "Not you!" If Chuck tries to sit next to Cam, Cam will climb off the couch and sit on the floor. It's kind of heart breaking.

Junior and Everett are happy to come to the rescue. They jump into Chuck's arms and say, "Dad, we love you!" That makes it better, but it's still hard for Chuck. He knows that Cam is an affectionate child. Cam showers me with affection. He grabs my face and kisses my chin. He smooths my hair and coos "Muhma" as he gazes into my eyes.

I've never felt so loved by a toddler—and so guilty for it.

But I'm no newbie to this parenting gig. I know this is a phase. Just as it passed with Junior and Everett, it will pass with Cam, and soon enough Chuck will have three sons who are up his ass to go fishing and camping and video game buying.

And then where will I be? Huh? All alone, that's where.

Nine years ago, pre-children, if I'd sent a text to everyone with this image attached, my phone would have exploded (wait, were we texting nine years ago?).

Now it's met with "Wait, didn't you get fixed?"

"MOM! Everett just threw up!" followed by Everett spewing mouthfuls of water into the toilet.

And "MOM! Cam just pooped on the floor!"

And "MOM! The cat left diarrhea on your favorite blanket!"

And "MOM! I got a detention in school because of my chronic gas!" This assertion was even accompanied by a handwritten note. Too bad I recognize Junior's handwriting.