Is it too soon to be sick of egg salad? 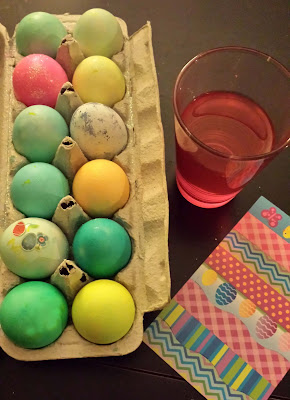 I'm proud to say that we colored eggs this year. Last year at Easter Cam was only one month old, and Chuck and I were too tired to do it—color eggs, I mean. Ehem. When I reminded the kids that we "forgot" to color eggs they said, "We did?"

Their hazy memory puts things into perspective. Like, if you're stressing about something or feeling guilty (like how you have a newborn and how caring for him/her is preventing you from celebrating certain holiday traditions with your other children), it's probably good to take a deep breath and remind yourself that a year later no one will remember.

Of course, this isn't a full-proof plan. Please don't go crazy not baking birthday cakes or not sharing Christmas presents with your children because Mrs. Mullet said it's ok, in one year no one will remember.

No, they're pretty astute in fact. It was Junior who pointed to the pink egg in the carton and said, "Mom, you're that only pink egg" before I'd realized that our household palette was greens, blues and well, more greens and blues and that yes, the pink egg was the cheese standing alone (i.e., me in a house of four boys).

"When it's egg salad tomorrow it won't matter," I told him.

He'd already gone on to something else, which makes me wonder if my aforementioned de-stressor mantra needs an addendum: It's probably good to take a deep breath and remind yourself that a mere second later no one will remember.

Ah hell, adjust accordingly. And go eat those eggs!
at March 28, 2016 No comments: Links to this post

Parenting is just the postponement of the inevitable

I really meant what I wrote in my last post. I'm not going to be such a worried parent.  I'm going to give them more freedom.

I'm actually not that bad. I let Junior and Everett run with sticks. They have free reign over the swampy area behind our house, as long as they call when we yell to them. I don't freak out at the park if they run ahead and I can't see them for a few minutes. Hell, I even let Junior ride his bike, alone, down the street to the neighbor's house.

With his hair on fire.

It's a good time to give the older boys a little freedom.

And why is that? Because...

OMG having a toddler is so much work OMG he's kicking my ass I don't even have time to watch Everett and Junior anymore OMG I never sit down he's into EVERYTHING he has eight arms and legs and crawls at the speed of a rocket OMG OMG OMG.

Seriously, Cam is the wild child Chuck and I have feared since we started popping out boys. Junior was a handful as a toddler, yes, but despite that one time at Chili's I never contemplated taking up smoking. Everett was a little strong-willed, but he never had meltdowns in public or took off in parking lots. They kept me busy, but I do remember sitting down from time to time. I think I even chewed a meal in 2013.

Cam, on the other hand, can level a room in 20 seconds. Books come off shelves. Hair comes off the cat. Remotes get thrown into windows. Clothes come out of drawers. Blocks get toppled. We have safety locks on everything.

There is no rest.

And bathing. I strip down to a tank-top and shorts, pin up my hair and set Cam free in an inch of water—"Release the kraken!" He does 60 mile an hour laps of the tub. If a bath toy gets in his way, he thrashes it with both arms, like an angry shark blowing through chum. When I tip him back to rinse his hair, he puts his legs together and slams them into the water, sending waves everywhere.

We've started calling him "Destructor"—affectionately, of course—and he's not even walking yet.

So you see, I don't have the time or energy to worry about Junior and Everett as much. They're in the perfect place to gain some freedom from my watchful eye. Mostly because it's exploded on my face. They also don't have to listen to me blubbering as much about them not being babies anymore because, you know, I'm so pre-occupied with one.

Hah. And there it is. It's easier to set them free a little—to watch them ride their bikes into the sunset or disappear into the woods—when you're holding sweet baby bliss under your nose and you know you have another five years or so of someone still needing you.

When did feeling free become a dirty little secret?

Chuck and I had to buy a bigger car this winter. Our small minivan-thing worked all right when it was just Junior and Everett, but if we wanted to go anywhere with all three kids, we'd have to move Junior to the third row "seat," which was more of a small crawlspace meant for people with accordian-style legs.

We ended up buying a used Nissan Armada which, despite its box-on-wheels appearance, has worked out quite nicely for us. We lovingly call it the Beast.

The downside, of course, is that if you get more space you tend to fill it with crap—which is just what happened. Strollers, bags, suitcases—even though no one's going anywhere—blankets, etc. You name it, it's in there.

I blame Chuck. He's a total hoarder in hiding.

It was his job, then, to empty the Beast this weekend so we could help a friend move a table. It was my job, later, to make sure it stayed empty. (And it did. Every time I saw Chuck walk toward the Beast holding something, I beat him with a stick.)

I did such a good job of beating Chuck that come Monday morning, the back of the Beast was still empty. When Everett, Cam and I picked Junior up from karate yesterday, Junior and Everett jumped over the seat into the way back and frolicked for a minute.

"It's so big back here!" they hooted.

I had a flashback. A beautiful, delicious flashback.

It was 1982. My cousin and I were in my grandfather's Subaru hatchback. In the way back. We were eight. He was speeding down the back roads of New Hampshire, windows open. Dust was flying. We were on our knees, beach sand digging into our skin. Our hair was in our mouths. He was probably going 45 but it felt like 80. We held onto the head rests of the back seat so we could get some air when he went over bumps. We were shrieking. He flew down hills. He careened around corners, knocking us into the sides of the car and into each other.

It was fucking good fun.

Fun my older children, ages eight and five, residents of the Land of Never-ending Safety, have never known.

I made a decision.

Junior's head shot up. "What? No we can't! You'll get arrested."

"Mom. Really? REALLY? This is going to be amazing!"

I drove slowly down the street. I heard them whispering, I can't believe we're doing this. I turned the corner, then another. I was about to turn down our street when I heard Junior say Aawwwwww.

Junior jumped out and yelled "I feel so alive! I'm going to tell everyone!"

I could see the headline: "Mother arrested for letting children sit in the way back for 1.5 minutes."

And they did. Jubilantly. Hand-gesturing-ly.

Email ThisBlogThis!Share to TwitterShare to FacebookShare to Pinterest
Labels: best cars for large families, driving with kids, Nissan Armada, the way back of the car

We were sitting at dinner. Chuck was still at work and so it was just the four of us (myself, Everett, Junior and Cam), as it is so many nights. Too many nights.

Everett was taking forever to eat his egg noodles--egg noodles I had hand-picked from my homemade chicken noodle soup because he is my picky eater and yes, I coddle him. The boy can make one bite last for hours. He slowly puts the food in his mouth, tucks it in his cheek and gets distracted by something on the table and bam, dinnertime has gone from 5:45-8 p.m. and he's still working on the same damn bite.

Watching him eat is painful.

I was short. I was tired. I was all the things we become when we are one person managing a fleet of children and all we really want to do is go the fuck to bed.

"Seriously. You'll be blind as a bat and your brother will have to help you get the last of the noodle into your mouth!"

"Don't say things like that!" Junior cried. "Don't!" He started to cry.

He was falling to pieces. My usually composed 8 year old was distraught over the thought of me being dead someday (of course, hello, Mom). I had to act fast.

I did some kind of half-laugh, half-chortle jump into the air to distract him and as I did, I snorted up a small piece of celery that had been in my mouth.

Everyone burst out laughing, but the truth is that the damn thing was STUCK. And it stung. My ears watered and my nostrils burned. I blew my nose and tried to dislodge it, but the celery chunk was up in my sinus cavity. I got an awful, panicky feeling.

Junior got me some tissues.

I blew. I tried to sneeze. I blew again and hopped around the kitchen.

Finally--FINALLY--I managed a kind of sneeze-snort-cough-choke and the thing came flying out of my mouth. It landed on the floor and as we all watched, the dog casually left her food bowl, walked over and ate it off the floor.

"Dad's never going to believe this," Junior said. He hugged me and ran into the living room. Cam threw his bottle onto the floor and Everett went back to working his way through his noodle.

I stood there, flummoxed. This is what children do: they suck you into a hurricane of tears and laughter and craziness and then they spit you out and skip off.

Everett made a little squeaking noise. He looked like a little turtle to me. "You can go play if you want," I told him. "Let's set the noodle free." He hugged me too.

I picked up Cam and brought him into the living room, where we all sat.