What we've been up to, according to the table in the hallway 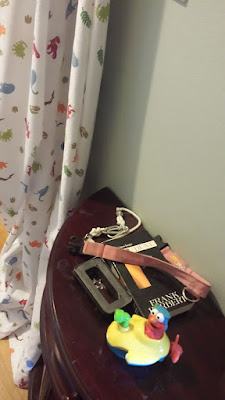 We don't have central air. We have window units, and because they're small and only cool one room at a time, I hang a sheet at the top of the stairs so they're not working overtime to cool both the top and bottom floors. I hang the sheet (this year it's a dinosaur twin sheet) by thumbtacks on either side of the stairwell.

Every once in a while, the sheet catches on someone's leg and comes down off the wall. If it's Chuck's leg, I hear him muttering that I'm trying to kill us all with my contraption. If it's Junior's leg, he screams "stupid sheet!" then clomps down the stairs in a huff.

Funny thing is, the sheet's been going up and down for the last four years and no one has attempted to find a better solution. Not even my Mr. Fix It husband. They accept my make-shift hazard and it hits me again that I really am in charge of this brood—in charge enough that they jetty around my decisions, even when they're half-assed.

Of course, when the sheet comes down, the thumbtack flies off, and I frantically search for it. But just in case, I keep a stash of extra thumbtacks in the square mouth of the vacuum attachment, which has been sitting on the hall table for about six months. The attachment came off the vacuum one day, and I keep meaning to glue it back on but for right now, it makes an awfully handy spare thumbtack holder.

The vacuum attachment is next to Elmo, who is in his submarine. I grabbed the toy from Cam right after I gave him a bath and right before he tried to chuck it at Everett's head. Elmo's been in the tub with the boys for eight years. Junior used to get upset that Elmo was glued in—"He'll never walk, Mom?"—but Elmo keeps smiling and spinning in circles in his little boat.

Chuck's favorite book, Dune, is on the hall table too. He tried to get me to read it, but I don't foray often into space. He tried to get Junior to read it too, but Junior's wrapped up in any-and-all things Percy Jackson right now. So there it sits, until someone (Everett, maybe?) decides to give it a chance.

The dog's extra collar is on the table too. Everett grabbed it from my bureau, and I caught him trying to put it on his baby brother and attach it to the dog's leash, so he could walk Cam. Everett was so surprised I didn't like the idea I actually thought of letting him do it. I put the collar on the table right before I pushed the sheet aside and brought both boys downstairs, so we could walk the dog.

Sometimes I go into other people's houses and regret that my home isn't more put together. I feel like a little bit of a failure because their counters are sparkling and clean and because truly, every flat surface in my home is full of stuff—and not pretty stuff like vases or frames but weird stuff like Lego hands and eyeless stuffed owls and yes, vacuum attachments full of thumbtacks.

But this post, which began in my mind as a humorous attempt as self-admonishment (don't they all?), has made me feel a million times better. Right now we're in the thick of living and yah, shit's going to accumulate...mainly because kids have so much shit.

I forgot about the white harness on the table. I think it belongs to Chuck's sleeping bag. Or maybe he stopped in the hall one day, right before he almost fell down the stairs, and thought he'd harness the sheet to a pole instead of enduring the thumbtacks any longer, and he changed his mind and put it down. I really don't know.

I'm pretty sure about this: One day it'll be gone, just like that. Everett will try to harness Cam to the wall or Elmo to the tub and the harness will end up somewhere else, maybe lost among the missing thumbtacks. I'll finally find the glue and reunite the attachment with the vacuum. We'll get central air or someone (hint, hint) will put up a proper curtain rod.