A Christmas outfit from that OTHER Victoria's Secret 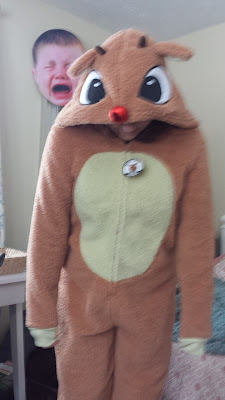 Thanks, honey. We can finally fulfill that furries fantasy I've been daydreaming about. Also, we are one step closer to becoming them: 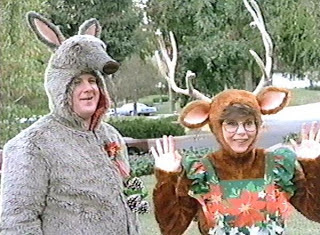 The silver lining? (I told you, there's always a silver lining), I know already what to get Chuck next year for Christmas.

Email ThisBlogThis!Share to TwitterShare to FacebookShare to Pinterest
Labels: better of dead, furries, furries and Christmas, not sexy

Toothbrush to the crotch? Bunny in your potty? Must be toddler time 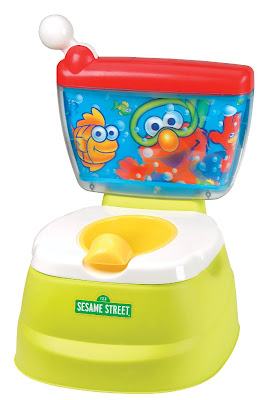 Where does the time go?

No really, I want to know.

Immediately after I hit publish on my last post — the one in praise of adoration of children and toddlers — my toddler Cam began a downward spiral in behavior. Granted, he had a cold but even after the cold ended his "challenging" behavior continued.

If there's one thing I've learned since having kids it's that euphemisms abound for the toddler years. Challenging. Independent. Strong willed. Hardy. They all mean the same thing: your kid's kicking your ass.

Cam has never been an easy going child. And forget what anyone says about your third kid being low-key because he or she has to be. It's a crock of shit.

This last month it's been the typical toddler stuff...plus extra, extra fun stuff like tantrums and freak outs. Shouting no. Throwing toys. Whacking Everett. Sucker punching Junior. Grabbing the cat's tail. Shutting doors on people. Ripping paper. This kid is so lucky he has the older brothers he does and that I keep a careful eye on all three or the older two would have leveled him months ago.

Chuck has taken the brunt of it. Cam started telling him he doesn't like him. That he doesn't want him to kiss him or hug him. The lowest point was a few nights ago when Chuck tried to help Cam put toothpaste on his toothbrush and Cam threw himself on the floor and screamed. Chuck gave him the option of standing up or going straight to bed. After a minute or so Cam was still screaming so Chuck scooped him up — and that's when Cam kicked Chuck (unfortunately in the crotch) and flailed his arms, knocking Chuck's glasses off of his face.

But Chuck. He's no newbie. After his voice went down an octave, he calmly put Cam into his crib and explained that he cannot hit or kick. Junior and Everett ran upstairs to see if Chuck was ok, and I came out of the bedroom, where I'd been in bed with a cold, and the four of us towered over Cam in his crib and explained again that Cam cannot hit or kick.

That's a lot of people commenting on one person's behavior. Cam looked small; we seemed like giants. Reprimanding giants. I'm not excusing Cam's behavior, but his life is run by a gaggle of people. Lately it feels as if Cam is a mini tornado and we're a houseful of admonishing forecasters.

After everyone went back downstairs I went in to see Cam. He was still sniffling. I asked him if he was ok and he said, "I just wanted my toothbrush. I just want to brush my teeth."

I took him into the bathroom and let him brush his teeth. I told him again that he shouldn't hurt Chuck and he said, "I'm sorry." We walked downstairs and he apologized to Chuck and gave him a kiss. Then he kissed Everett and Junior and said goodnight to the cat and the dog and we went back upstairs.

There was a day a few weeks ago when Cam pooped on the potty. He ran out of the bathroom and shouted, "I pooped!" And everyone — Chuck, me, Junior and Everett, maybe even the cat and dog—went running into the bathroom and marveled at his feat. He jumped up and down. All the accolades! The fanfare! I thought, he is lucky to be so loved.

That night as I watched Cam lie in bed I thought that same thought again. Yes, we are a chorus of people when he needs direction. He hears a stampede when he takes someone's toy. Nothing he does goes unnoticed because there are so many of us in this little house. But there is proof of vested love in his every action. Four people reminded him to be kind. Four people marveled at poop.

Don't forget the cat and dog.

As someone who spent the first eight years of my life as an only child—and someone whose parents took my pets for rides when they didn't want them anymore — that to me is pretty fucking amazing.

So that's my high note for this challenging month with this hardy child. There is a silver lining. Always.

I hope you have a fabulous holiday. I hope you eat cake with frosting and wear nice slippers and get to wash your hair and maybe get that bunny you've always wanted. I hope 2018 is better for all of us. Merry Christmas!
at December 23, 2017 No comments: Links to this post