Keep your hands off my dots

I'm all over the place on this blog, I know. One day I'm talking about the economy, the next plastic spiders, the next pajamas, and the next freeze-dried tortilla soup. I want to try to connect the dots, I really do, but I'm coming to realize that these days my dots behave more and more like rodents that scatter in the light than like pretty, orderly circles—and that maybe trying to connect them is a lost cause.

My dots are a huge clusterfuck and I need to embrace that.

Of course, I blame my dot mutiny on the children.They've all but ransacked my brain.

We were doing fine. We were getting along swimmingly. Then, in a matter of seconds, mayhem.

Someone was shouting weiner. There was toothpaste on the wall. The cat jumped out of the tub. I stepped on Mr. Potato Head's eyeglasses. Frothy blue drool ran down chins. Someone needed a towel. Someone needed to spit. The Thomas the Train wall decal was stuck to someone's shirt. No, it wasn't. It's Gordon, Mommy! Don't you remember Gordon?! And then Everett, I honed in on his teeth like a ninja. Armed with Elmo, darting in and out of his little mouth to get those tiny crevices.

When the toothbrushes were finally rinsed and placed back into their cups my head actually felt hole-y.

And I hadn't even gotten into pajamas—"Please stop jumping. Please get your finger out of your nose"—or picked stories—"Please not Dr. Seuss again, Junior. Mommy's brain hurts"—or told bed time stories—"There once was a man with a nose. No wait, a horse. And the horse had a nose? Sorry, where was I?"—or shot down the stalling tactics—"Junior, honey, your curtains are .005 centimeters apart..."

But this is nothing new. When I was pregnant with Junior in 2007, my co-worker told me that parenting was the toughest job I'll ever love (remember that Peace Corps slogan?). These observations, these ruminations, are nothing new. There are so many parenting blogs now, they're actually becoming tiresome.

Still, I wonder: Where is the fairy or woodland creature that will magically appear and grant me a few months off so I can catch up on sleep? I love my spawn, I really do, but this fog has enveloped the land—the land! We should all give ourselves some major credit for even knowing how to write our own names, never mind helping our off-spring learn how to write their own.

Or dot their i's.

On a lighter, cheerier note

It's a little after eight and both children are asleep. I guess I could have tweeted this and/or Facebooked it—really, is it blog worthy—and then stumpledUpon myself or binged myself or whatever else one does in this social media age to document every minute act—"Just farted!"—but no, I can't waste time on that. The kids are asleep and I finally have a few minutes of peace to catch up on some of my favorite blogger's posts.

I can read! Uninterrupted!

Chuck and I went to Junior's kindergarten Open House this week.

I'm still depressed about it—but the triggers aren't the usual suspects. Sure I'm a little saddened as the reality sinks in of how fast it really does go (Junior's legs look like giraffe legs. I get his shoes and Chuck's shoes confused).

As the teacher prattled on about tests, scores, reading, math and homework, all I could think was,

Crap. What if the economy is still terrible when Junior graduates? What if he doesn't excel at anything in particular and ends up with a useless Liberal Arts degree, like every other poor fool who goes to college without knowing what to major in? Worse, what if he decides to be an English major? And he has $120,000 in college debt and the only job he can find is at the local copy shop? What if he's like my brother, who is almost 30 and doesn't have health insurance because his job keeps his hours just under the state requirement to offer insurance? What if Junior's student loans are so high he can't afford rent and has to live with me and Chuck? What if it just doesn't get better? And look, this teacher is worried about the alphabet?? Who the fuck cares about Dick and Jane! Families can't feed their children! Dick and Jane have to split a hotdog every night. They whimper in their beds. Spot is licking the kitchen floor for crumbs. Crumbs! Let's keep our focus!

When the teacher finished, I all but scraped myself off the floor. The economy hits home with me. Chuck's been laid off twice. Our house in Mulletville is on the market for thousands and thousands—and thousands—less than what we bought it for. My brother is scared to get sick. I've been bringing our extras from dinner down to one of our neighbors because I know they don't have enough money for groceries.

Everyone seems to be struggling. Well, not everyone 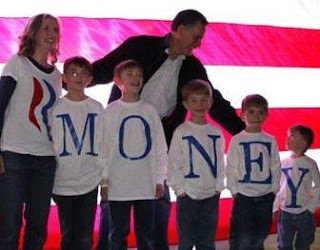 but I sure as fuck don't want to talk politics.

Love those kindergarten open houses. Can't wait to see what I glean from the parent teacher conference. Maybe I should pop a Xanax first.

On a totally unrelated note, I owe efoods a review of some freeze-dried food they sent me. 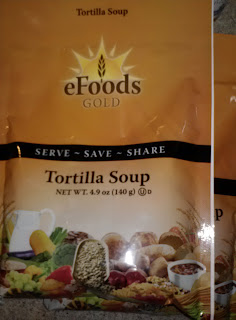 I know it doesn't sound particularly appealing, but this stuff is delicious. In fact, we are saving the last two packages for a later date. They were that good. And we have time. The food doesn't expire until 2027, which, curiously, is right about the time Junior will graduate from college.

I guess I know what I'll be serving on his first night back home with us.

How to have a heart attack

2. Try not to get a lot of sleep. (Yes, I know, that statement is laughable.)

3. Go down into the basement to retrieve an old trunk one of your ex-boyfriends gave you many years ago (repainting it is going to be so, so delicious).

4. Notice the cob webs and crusty sacks of ick dangling from it. Clean the goo, making sure to shriek and flail around a bit. Trudge upstairs with it.

5. Congratulate yourself. You've got spiders and creepy crawly things on the brain. You're perfectly primed for the next step.

6. Get on your hands and knees so you can pull out all of your children's cars and trucks from underneath the train table (that's why you were in the basement retrieving the trunk. You can keep toys from copulating and multiplying if you hide them, right?)

7. Reach underneath the train table...deep into the darkness...feel around with your hands...don't forget about those crusty sacks of ick you just cleaned. Are you ready? Ready for that heart attack? 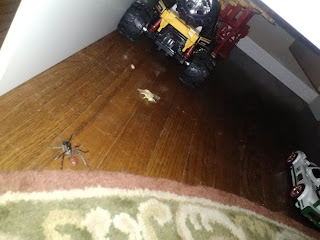 8. There we go! Leggy things! Right by your face! Scream! Scream bloody murder and clutch your heart! Scream so loud that your kid starts screaming too. Scream and scream some more!

9. Now stop. Look, see? They're not even moving. Blow on them to see if they scatter.

10. There you go. Your mental faculties are slowly coming back. Go ahead and flick that mammoth spider and his yellow side-kick around a little. Yah, stomp on them! They don't care. They're just rubber and plastic remnants from your kid's bug-themed fifth birthday party, you jackass. Nothing to fret about.

11. Sit down. It's only 9:45 but it's been a long morning. Make a mental note for next year's party theme: cute, fluffy bunnies and rainbows. What were thinking when you picked bugs? Kids' birthday parties are rotten enough without prolonging the mental agony.

12. While you're sitting down, try to decide on a paint color for that horrible trunk. What you thinking when you dated dandruff-in-eyebrows man? What?

If you need tips on how to enjoy your Thursday, you'll feel some handy ones here. No charge, I promise.
at September 05, 2012 6 comments:

When I was in my early twenties I got a job as an editor at a gourmet food magazine. I wrote about this a while ago—mostly so I could explain my fondness for men named Rico—but lately I've been thinking about someone else from that time in my life.

I don't even know the woman's name, but she was a freelance designer for the magazine, and I hated her with a passion.

Every month, she'd mail me a disk with her intricate food drawings, and even though I kinda sorta knew what I was doing, she'd insist on talking on the phone and walking me through each drawing, and where it was supposed to go, and how it should be labeled, and what side of the page it should be on, and how many pixels it should be.

She was a major pain in the ass about her work.

The whole time we were on the phone, I could hear kids screaming in the background. She'd cup her hand over the phone and hiss, "I'M ON THE PHONE," but the kids would keep screaming. Sometimes she'd talk over their screams, and I'd have to hold the phone away from my ear.

I always imagined her standing in her kitchen in a ratty pink bathrobe. Pancake batter stuck to her sleeve. Kids climbing her legs. Her beautiful drawings created a strange dichotomy in my mind. Was she haggard or poetic? Dingy or magical?

Until today, I hadn't thought about that woman in years. Then there I was, on the phone with a new client—why hello, new WAH life, where Sundays are actually part of the work week—when Junior decided to pitch a fit about something absurd.

I think he found a brown spot on his banana.

I covered the phone and hissed, "PLEASE STOP." The client didn't laugh when I made a joke about children and bipolar behavior. Actually, I didn't make a joke, I shouted a joke over his fit.

I picked him up, handed him to Chuck and raced outside, where I finished the conversation on my front steps—in my pajamas.

After the call was over I sat there a while. I looked down at my crummy pajamas. The peanut butter on my pajama pant leg.

She probably hated me too. I was curt and impatient. She probably wanted to say, "Look, I have kids and I'm trying to be true to myself professionally. It's not easy, so fuck off."

Ah, now that. That would be a satisfying thing to say. I mean look, the last time I was outside in my pajamas, I made a run for it. I actually ran.