Pop quiz: Did Willy eat the lello geep and wash it down with a bee-ah or not? 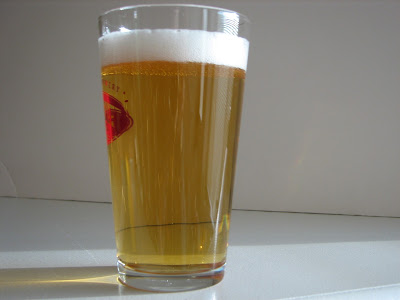 Toddlers mispronounce words. It's just what they do, and it's what makes the toddler years so darn cute. "Lello" for "yellow." "Willy" for "Lilly." Junior said "yion" for "lion" and "schick" for "sick." Everrett said "beena" for "banana" and "geep" for "grape" until he was almost three. And so on.

You learn their idiosyncrasies and become an interpreter for them, sometimes for years. You explain to bewildered grandparents that your kid is freaking out because lello beena means he wants a yellow banana and that they probably shouldn't have given him that extra serving of geeps because he's going to get schick all night. So thanks.

Sometimes you do some awkward explaining in public because people think your toddler is spewing naughty words. Like during Junior's "bitch" phase.

And now here we are again, except this time it's "I need BEER!"

Cam, our two-and-a-half year old yells it when he's tired or overwhelmed and needs some comfort, so, as you can imagine, it happens rather often. At the library and grocery store. And at the mall and playground. During Junior's soccer practice. The day I took Cam into the office with me. At the pediatrician.

Of course, he's not asking for beer. Thank God. What kind of assholes would we be if our two year was screaming for beer. No, he's asking for his stuffed bear, which goes everywhere with him but sometimes gets left in the car or lost at the bottom of the diaper bag because it's a small bear. I won't tell you how many hours of my life I've spent looking for that damn bear. If you have kids and allow them to take their stuffed animals out of their beds I'm sure you can relate.

His older brothers think it's hysterical. "Do you need beer?" they'll ask. If Cam shakes his head yes they'll shriek, "I need whiskey!"

Cam also adds a northern twang to some of his words, so beer/bear sounds like bee-ah. It takes me back to the time I lived in Maine. Suddenly he's not a toddler; he's a hairy woodsman in plaid flannel from up north, needing his fix.

Despite the aggravation of looking for the damn bear and the ear shattering decibel at which Cam yells "I need BEER!" when he's particularly upset, I have to admit, I'm enjoying this linguistically challenged stage more than ever. Being a 40-something mother who is on my third kid, I couldn't give a darn about who thinks what about my kids.

Ten years ago, with Junior, I would have scrambled to explain to anyone who'd listen that what my child really meant was that he needed his stuffed love, and stat. "He means his BEAR," I might have said, injecting the statement with as much sheepishness and relief as I could possibly muster. Now I just smile, pat Cam on the head and say, "I need a beer too, honey."
at September 19, 2017 2 comments: Links to this post

Email ThisBlogThis!Share to TwitterShare to FacebookShare to Pinterest
Labels: beer, toddlers and speech, when your toddler says funny things

I finally tackled that big ass stack of laundry. It's the chore I dread AND loathe AND detest the most, even with the kids pitching in. At the bottom of the basket was this: a big ass—I guess that's the theme for today—pile of unmatched socks. 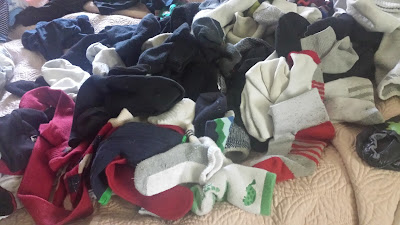 I've been meaning to do something about the socks for awhile but it's crazy, I sometimes need to eat and sleep so the task keeps falling off my radar. And really, who the hell even wants to deal with that? Unless you're OCD and enjoy color sorting and carefully making lost socks meet up again, in which case please contact me right away.

I've tried to make sock sorting fun. I've thrown three sock sorting parties for me, Chuck and the kids so we could sit down and tackle the pile together. I'm serious. I called it just that. It went all right, but the movie on in the background was a big distraction, and then Cam came along at the end and started throwing socks all over the living room, which sent his brothers into freak-out mode and I was left, again, picking up wads and wads of socks.

The cheese does, indeed, stand alone.

After Chuck was invited to the second sock sorting party he came up with a good idea.

He ran off to BJs—that's his M.O., he has a brainstorm right before a chore, then peels out of the driveway to accomplish said brainstorm—and came back with black ankle socks for the whole family.

But, truth be told, black ankle socks on kids kind of skeeves me so I went against Chuck's same sock mandate and bought the kids some white ankle socks. And myself some gray anklettes. Then my mother admitted that she also wears black anklettes of a different brand than Chuck and that she's been losing socks at my house too (she takes them off after a day of babysitting because they are covered in cat and dog hair and, ok, huge dust balls. I also dread AND loathe AND detest vacuuming).

So there we were again. The mandate failed. The socks were still unmatched. And that third sock sorting party was sorely unattended. 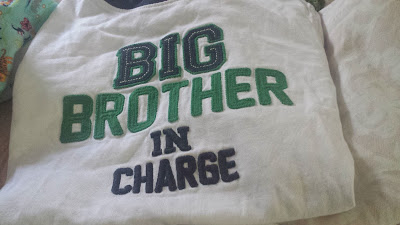 It was buried under the socks at the bottom of the laundry basket. It's too small for Everett and Cam is the last brother, which means this shirt can officially be retired. There are no more little brothers. This is how we ended up with a third child. The stabs to the heart when you realize precious pieces of their childhood are over for good? They have a real way of getting those ovaries ticking again.

I'm joking. That's my age in sock years. Or is that how many pairs I have left to sort? Or tears to shed? Or sock parties to plan? Or sock puppets to make?

Or I could try some of these ideas: 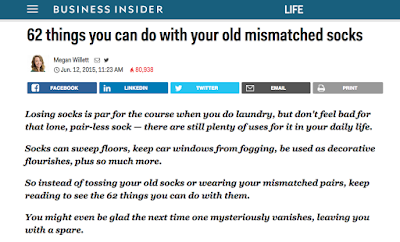 Or I could just throw all of the socks back into the basket, put it off for another six months and get back to more important matters: watching my kids grow up so effing fast. 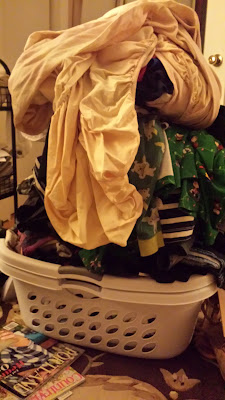 Siiiiiiiigh.
at September 02, 2017 No comments: Links to this post