Parents found drunk in foul smelling basement with a chicken 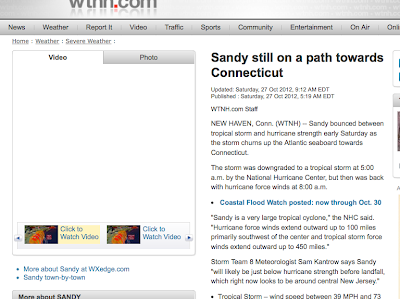 Storm Sandy is headed for Connecticut. Luckily we have a basement stocked with beans and a liquor cabinet stocked with vodka. We'll be gaseous and drunk but by God, we'll be safe (I hope).

Incidentally, I don't mind if this storm postpones Halloween because I have no idea what Junior is going to dress up as. One minute he wants to be a washing machine, the next Optimus Prime. And Everett? He won't even let me put an arm into his costume: 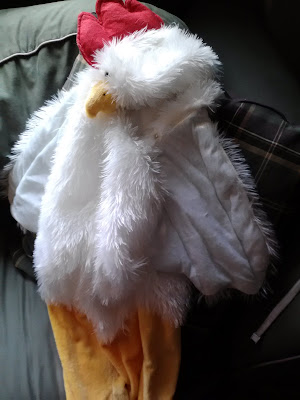 I tried—nicely—to wrestle him into it, but he didn't want any part of it.

He's in for a big surprise if Storm Sandy hits and we lose power, and we need to wear shit like this to stay warm.

Now you understand this post's title...and why I'm kind of dreading Halloween.
at October 27, 2012 7 comments:

This probably won't happen to you

I shouldn't even post this post because as soon as I do, anyone who read my last post and thought, Oh, honey, bad shit happens to kids all the time, that 'True story' column in Parents magazine is gold, will get to revel in their smugness.

But if you've learned anything about me from this blog, you know that I don't mind providing sustenance for smug people from time to time. It all comes out the other end eventually.

So here goes. Last week, Everett and I were standing in the back yard, patiently waiting for Junior's kindergarten bus to come. If you're from Connecticut too, 1) I'm sorry and 2) you know that it was brutally windy all week.

While we stood there, getting mussed about, this plastic kiddie pool waited right alongside us. 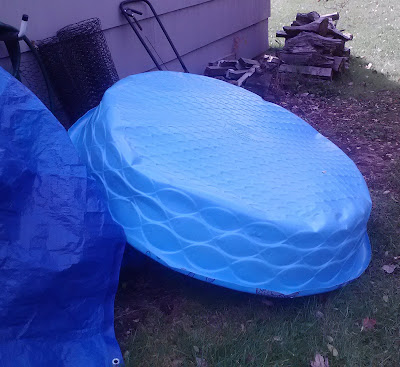 As soon as I heard the bus I said to Everett, "Let's go get—"

But I never finished my sentence because the wind picked up the pool and blew it through the air. Then it rolled on its side toward Everett, knocked him down, and fell on top of him.

Of course, I ran to him. And then suddenly Junior was at my side, demanding to know what was going on.

Everett was upset. Junior was upset that Everett was upset. I was upset, too, but I was also incredulous. I half expected someone from Parents magazine to emerge from the woods and say, "Fuck with us on your blog, will you? I'd think twice about that next time."

I really did look over my shoulder one too many times.

After the excitement died down and the kids' tears had been wiped away, I secured the pool with some logs. I spent the rest of the afternoon somewhere between bemusement—Really? Attacked by a rogue kiddie pool?—and befuddlement. You know, I can't believe that days after I bitch about the 'True story' column my kid gets creamed by a rogue kiddie pool and I think to myself, Wow, that would make a really good 'True story'.

I also was immensely grateful my kid hadn't been decapitated. He'll probably never swim again, or maybe he'll have reoccurring nightmares about flying blue orbs, but it all worked out. I even planned on telling the neighbors about it when I saw them later that night. Like, Hahaha, you'll never guess what happened this afternoon.

But they recently had a new baby—number four—and somehow, just somehow, the story never made it to the table.
at October 24, 2012 8 comments:

As a parent you should always be afraid. Of everything. Especially couches. And whisks. And throw pillows. And windchimes. I said everything, didn't I?!

I've really enjoyed reading Parents magazine over the years. When I first had Junior, I giddily raced out and bought an issue; yes, tell me everything I need to know about #2 nipples and cutting sandwiches into fun, cool shapes! Please.

Lately, however, I have begun swearing at the magazine. It's because of their monthly column, "True story." If you're not familiar with the column, it details horrific, "real-life" injuries sustained by poor, innocent children at the hands of their parents.

Like this poor kid below, maimed by a coat hanger: 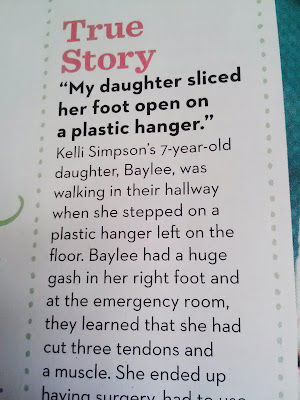 If only the sweet girl's mother hadn't had the poor judgement to buy clothing that needed to be hung up, this senseless tragedy could have been avoided.

And this sad little cowboy (the column used to be called "It happened to me"—insert demonic mwahahahahaha cackle): 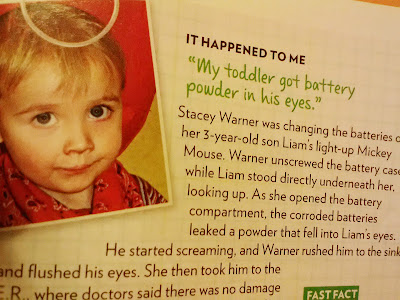 If only the boy's mother had put down the crack pipe—I mean, battery-powered toy—and decided to switch to wooden toys, this child's suffering could have been prevented.

Every month it's a similar tale. Children come close to losing fingers because of stray hairs (!). Coffee grinds that should have been thrown away (!) end up in shoes and cause disfiguring bunions. Salt and pepper shakers that should have been glued down to the table (!) end up stuck in eardrums, rupturing them and causing the worst case of deafness known to mankind.

There's this pervasive sense that "If only I'd seen the danger in that [insert harmless everyday object] little Billy wouldn't have to limp to school. Learn from my example...before it's too late."

But you can't learn from examples that aren't realistically preventable. You don't have 10,000,000 eyes in the back of your head, ergo you can't be sure that even though you bolted your plastic hangers to the coat rack, someone else didn't come along and accidentally yank one off and forget about it on the floor.

For Pete's sake, the damn dog could have bumped the rack and undone all your hyper-vigilant handy work.

And for fuck's sake, do you really have the mental stamina to be sure your child isn't sitting beneath you every time you unscrew the battery casing on your children's toys?

I've written about the fear mongering before (yah, I hated the Superbowl suggestion) and I'll continue to do so. We have to stop believing that we can prevent bad things from happening to our kids if only we watched them more, or put them in rubber suits, or thought ahead more, or planned more, or glued things down more.

Features like "True story" perpetuate paranoia and guilt. Yes, accidents happen and when they do you'll feel bad and wish you could make it all better, but columns like this turn everyday objects and tasks into worst case scenarios. They make you look at the coat hangers in your closet and think, This could kill someone!

And here we thought wire hangers were bad. 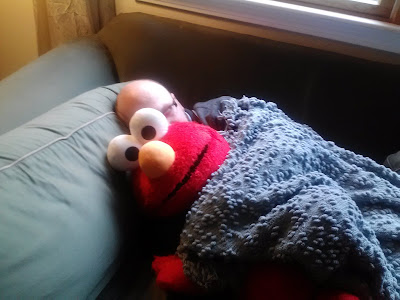 I can't believe Elmo had the nerve to look straight at me when I caught him and Chuck canoodling on the couch. Spooning! In front of the kids.

Email ThisBlogThis!Share to TwitterShare to FacebookShare to Pinterest
Labels: Chuck will nap with anyone, Elmo, Spoon-me-Elmo

And now, a novel about female bosses and why the Transformers should be our management model

Working part-time out of the house a few days a week and doing freelance graphic design during the other days has essentially morphed into another full-time job (ironically, I probably work more hours than I did when I worked at Mulletville Corp). But I'm not complaining. Oooh no.

For the first time in my 20 years of working, I work for someone who isn't evil. Even more shocking, it's a woman.

I haven't had much luck working for women. My first boss was a woman who gave me the silent treatment when I made a mistake; it was up to me to figure out just what that mistake was and how to tiptoe around her until the frost melted. Eventually I quit.

During my second job, I had two female supervisors. They were joined at the hip. One had a crush on a male co-worker who had a crush on me. Both women gave me shit projects and reviews as a result. Eventually I quit.

My third job I worked under a woman who was eight months pregnant. She wanted me to lie on my TPS reports. Yep, quit.

My fourth job, at Mulletville Corp, was one of the most horrific experiences of my life. My boss, Kathleen, had a breakdown on my first day. She made my life miserable for years. (If you want to know more about the traits of bad bosses, she inspired the post). I'd like to say that I quit under her tenure, but I lasted past her retirement and inherited a new female supervisor—one whose secretary would do the irritated sigh for her when I was late or, um, late, or um, even later.

Yes, I was late a lot, but my new boss was also a mother—to two adults—and had told me from day one that she understood that things come up when you have two young children at home. Her "understanding" lasted a whole three weeks. It quickly became apparent that she expected me to be the kind of working mother she'd been when her children were young: one who comes in early, stays late, offers to work holidays, and answers emails at 11:30 at night.

She voiced her concern to the Marketing Head. I started hiding my purse and jacket in the car. I dreaded seeing her and her sour expression. Even though I was doing my job well, I started to feel like I was always in the wrong. I apologized constantly.

I was lucky as hell to be able to quit.

So yes, based on all of my experiences, I find female bosses to be catty, manipulative, insecure, irrational, emotional, abusive, and bitchy. I'd almost given up on women, in fact—until I took my new job.

My new boss gets it. And here's how:

A few weeks ago, I needed to work from home. I emailed her and asked if she'd mind. After I hit send, panic set in. The internal voices started up. She thinks I'm a slacker. She doesn't think I can handle working and homelife. She hates me. She wants to fire me. And so on. Then, an email from her, saying it was fine. She trusted me to get my work done. She was glad to have me on her team.

After I relayed all this to Chuck—he was riveted—he quickly put it into perspective: "Wow, you're really fucked up because of your old bosses."

He's absolutely right. This is the first woman for whom I've worked in close to 20 years who has given me genuine, positive feedback. I actually need to train my mind to understand that she's not out to sabotage me.

Her effective management makes me want to do a better job.

The funny thing is, my son is learning this lesson right now from the Transformers.
Optimus Prime, leader of the nicey nice Autobots, always praises his team; in turn, they want to serve him. Meanwhile, Megatron, leader of the evil Decepticons, shats on his underling, Starscream, all the time; in turn, Starscream wants to overthrow him.

I'm not kidding when I say that I watched this episode and thought, "Holy shit, the cartoons covered this when we were children. Children!"

I make a motion that the Transformers be shown in boardrooms. Or at least be worked into the management syllabus in college.

Special Halloween projects for the kids 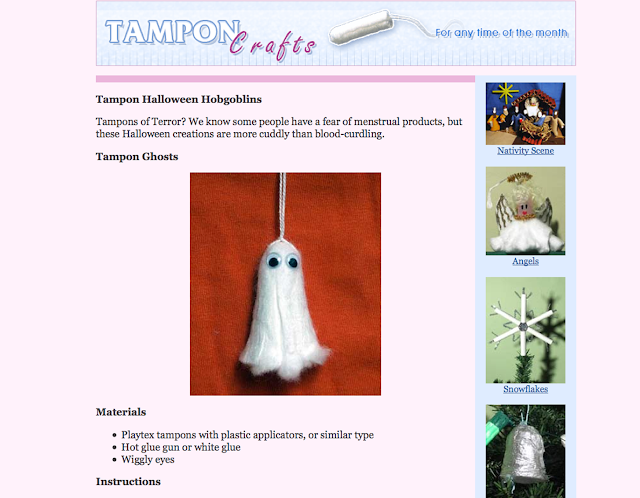 This is so much cooler than Martha's fake bat templates. So.Much.Cooler.
at October 01, 2012 8 comments: