When you're a parent (heck, even before you actually become a parent), you live in a constant state of wonder:

I wonder how the hell I'm going to get this baby out of me.

I wonder when he will sleep for longer than an hour.

I wonder when he'll stop being so fussy.

I wonder if my mother will always criticize my parenting.

(The joys of parenting!)

Most of the time, you wonder about the firsts: first tooth, first step, first solid food. They're exciting, yes, but there are a whole slew of firsts that never make the baby book.

For me, I couldn't help but marvel at this bodily first with Junior. Also, the first time I had food poisoning and had to tend to two children. And the first time my kid said a bad word, even though it wasn't intentional. So many exciting firsts.

Just last night, when I was home alone with the three boys and Chuck was still at work, this first happened:

We were all upstairs when we heard a strange noise from the kitchen. Junior—who always has been my code-red child, the one who screams "RUN" and then totally books off, the one who shouts "Call 9-1-1!" even though it's not really a crisis—turned to me calmly and said, "Stay here, Mom." As he went downstairs, he put his arms into his karate stance. He came back a few seconds later and said, "All clear. It was the cat."

It all happened so fast, and yet so slowly. I stood there for a moment and stared at him. At nine, he's a solid guy. I can wear his shoes. I mistake his shirts for Chuck's in the laundry. He's as tall as my shoulders and yet, he's been my Junior, my first, for so many years I didn't recognize the "stay here, Mom" voice or the calm young man who confidently stepped down the stairs.

He saw me watching him and asked what was up. I didn't tell him what I was thinking. I ruffled his hair and told him to brush his teeth. That's the thing about children: They're so much more than that first tooth. They keep changing and surprising you and some days, you find yourself wondering who the heck this new little person is.

See? I told you it was all about the wondering.
at October 24, 2016 No comments: Links to this post

Email ThisBlogThis!Share to TwitterShare to FacebookShare to Pinterest
Labels: kids and karate, kids grow up, kids who worry

I'm going to start this post off in an unruffled way by saying—calmly—that I am a lover of magazines. If I had to assign a level of love to my well, love, I'd say I'm borderline freaky (yes, flasher at the bus stop) about them.

Every once in awhile I treat myself to Bella Grace—which is a beautifully designed, stunning magazine full of gorgeous photos—and the usual smattering of homey-cozy magazines, but I don't have 88 billion subscriptions.

If I had 88 billion subscriptions, like I'd really want to have, my husband Chuck would leave me. Because I don't read a magazine and get rid of it. I keep it forever.

Seriously, we trip over small stacks of magazines in our home all the time. Surprisingly, no one gets upset. Probably because for every magazine my son trips over, I trip over a train for him. The other son? Legos. Chuck? AV cords and cables. I guess you could say we are a home of happy trippers.

(With achy feet and bruises.)

Anyway. Because I love magazines, I usually grab the free copy of Parents magazine from the pediatrician's office. I want to like the magazine, I really do. Before I even had kids I would stare at the magazine cover at the grocery store check-out and think, Someday I'll buy this. But no, even though they ditched that absurd column, I still have anger issues with the publication.

In fact, just the other day I raced into the bathroom, where Chuck was trying to poop in peace, and shouted, "WHO MAKES LUNCHES LIKE THIS FOR THEIR KIDS?" I shook the page in front of him: 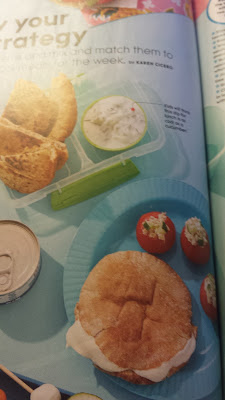 (He's so sweet. He actually agreed with me before asking me to leave him alone.)

That's a photo from Parents' September 2016 issue, called "Simply your lunch strategy." Simplify, ey? By hollowing out a few small tomatoes and stuffing them with chopped veggies? As if. The tomatoes are for Wednesday's suggested lunch. The next week's menu calls for Cobb Salad and homemade egg drop soup.

What the fuck? I ate half a granola bar that was stuck to my kid's shirt yesterday for lunch because, with three children and three different jobs, I don't have time to breathe—never mind stuff small tomatoes so my well-fed, coddled children can stick up their noses at them in the school cafeteria. And egg drop soup? Sure, I'll make it. Then I'll feed it to the garbage disposal, which is the best eater in my house when I try to introduce "new and healthy" dishes to my children.

I know what they'll eat, and I make it. That's where I'm at.

The picture below pisses me off too. 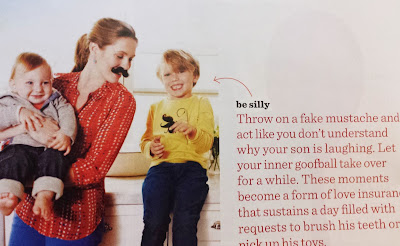 I know I'm projecting, but that woman looks miserable. She can't even keep her eyes open! She's holding that heavy ass toddler. The kid next to her is sitting on the counter, which, in this age of helicopter/velcro parenting is a big safety no-no (even though he's probably eight). She probably has had to pee since noon but can't catch a bathroom break. And she's being asked to "be silly" by wearing a fake mustache.

The poor woman probably has 30 loads of laundry to sort, tubs to scrub, a marketing campaign to finish—oh, and small tomatoes to stuff for lunch (!!) and yet, we want more of her.

We want her to laugh and play and be silly so she can "Spread the love."

She probably doesn't have enough energy to spread her butter on her own toast!

I've had it. When is enough enough? When have we crafted, given, prepped, smiled, encouraged, fed, bathed and clothed them enough? When did this sacrifice-everything-for-children-movement start? When did peanut butter and jelly, an apple and carton of milk (all organic, of course) stop being enough? Why must we origami their miniature vegetables too?

More importantly, if I'm not eating well because I'm too busy making sure they're eating well, when did that become okay and/or expected? How about an article about a mother (or father) who makes herself a delicious omelette for breakfast, then sits down and eats it—this is a big deal if you have a toddler—and then chucks cereal and milk in a bowl for her kids after she's done? Icing on the cake: She feels full, content and not at all guilty.

I'm not all piss and vinegar today. I promise. Even though I'm never reading Parents magazine again, I want to commend them on their article (also in the September issue) on balancing work and life, because it had this line:

If you're reading this post and you also want to hug the woman wearing the fake mustache because you give until you bleed, I want you to write down this line and tape it to your fridge. You don't even have to be American. You can be from outer space for all I care. Just know that you should be basking.

BUT NOT WHILE WEARING A FAKE MUSTACHE.

Email ThisBlogThis!Share to TwitterShare to FacebookShare to Pinterest
Labels: a sandwich is fine, enough is enough, Parents magazine, we give too much already
Newer Posts Older Posts Home
Subscribe to: Posts (Atom)