This weekend was a very sad weekend. We had to put down one of our cats.

It was this guy: 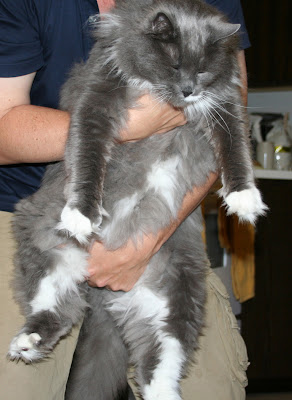 Aka the Butter Thief. Aka Fatass. Hairball. The Jerk.

I had terrible names for him and often (read: always) hated the amount of vacuuming I had to do because of him (despite using the Furminator), but nothing could have prepared me for the profound loss I feel.

In January, when the Mulletville Lite vet removed a cancerous tumor from his side, he said the cancer had metastasized. He gave him six months to live. I should feel grateful he lived five months longer than he was supposed to, but I don't. He was only 10.

My heart is broken.

So is his sister's. She's been staring at the yard, waiting for him to come back for dinner. 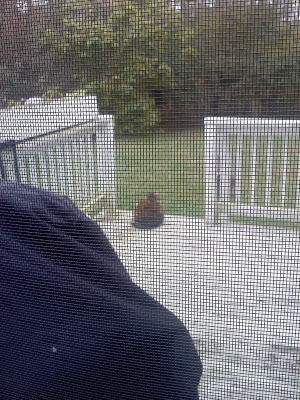 Before I had children, I would spend entire Sundays curled up on the couch with the cat. He was warm, fluffy and malleable. When you are in your mid-twenties and have a day to spend on your couch watching movies, nothing compares to having 25 pounds of purring fur stuck to your side.

Years later, after Chuck and I got married, he would spoon Chuck in bed. I'd literally wake up to find the two embraced like lovers.

In the last two months, the cat's health went downhill quickly. Once plump and lazy, he became thin and lazier. On Saturday, it was clear he was in a great deal of pain. I crouched down next to him. Pet him. Said good-bye.

Chuck came back from the vet an hour later. With the cat in the trunk.

That was...unexpected. Especially when Junior wanted to see what the big deal was. (Ever try to say one more good-bye to your dead cat in the trunk while your four-your-old is yelling, "Can I see? Can I see?" If you have, please email me. I'd love to hear how you handled it.)

We buried the cat at the edge of the yard. We said a prayer. The stone we chose as a marker looks like a crouching gray cat; over the last few days I've looked out the window quickly and tricked myself into believing it's him.

I want to hold him again. I want to have a whole Sunday to curl up with him. I want to take back every time I shooed him out of the kitchen because he wanted to eat again (who cares if he was fat?).

I want to lay my head on his belly and hear his deep purring.

Now that you're thoroughly saddened (or laughing at me for bawling uncontrollably about a cat), I want to share a piece of a poem I have loved since college. It's by Jane Kenyon, and it's a stanza in a poem entitled "Having it Out with Melancholy." It reads:

The dog searches until he finds me
upstairs, lies down with a clatter
of elbows, puts his head on my foot.

Email ThisBlogThis!Share to TwitterShare to FacebookShare to Pinterest
Labels: he had a good life, I miss my cat, missing a cat

I'm so sorry :( 10 isn't old for a cat, certainly not old ENOUGH. Pets can be obnoxious but they love us unconditionally; how do you replace that?

I am so very, very sorry for your loss and anyone who has ever loved an animal will understand - I feel sorry for anyone who will find you silly for crying over a cat because they clearly have never experienced the love of a pet.

One more hour, one more day - one more week... it's just never enough when you love someone!

I am very sorry. No matter how old they are it is never easy to say goodbye to them
Goat hugs

Before I married Old Dog, I had another dog, an Australian Shepherd/German Shepherd mix named Esme. She had long, silky fur like a Collie with the coloring and markings of a German Shepherd. She looked like she was wearing black eyeliner curling up and out at the corners of her eyes, like Elizabeth Taylor as Cleopatra. She played Frisbee with a fierceness and focus bordering on addiction, but she also loved playing with small children, even though they couldn't throw it very far. She'd always bring it back and drop it politely at their feet and then wait there, crouched, for the next throw.

When she was 10, she contracted bladder cancer. They said with radiation therapy she might live another six months. She made it a year and a half without the therapy. One night we woke to hear her stumbling around the house, searching blindly for some spot where she could get comfortable, but she couldn't find one, and we knew it was time.

hugs I've not been back for a while. I'm so sorry to read and hear of your pet loss. My aura is 15 1/2 and although I hated her the first 4months we had her(kitten that chased my toes), now I can't imagine life without her and I know she will be gone soon. She's also losing weight lately and not "herself", but I'll just wait her out. It's amazing how their little kitty hearts capture ours.

i'm really sorry for your loss.

So sad. For all the krappe people give cats, they are amazing little critters. Once they adopt you as their own, it's all over. Hopefully his sister can give you some comfort.

I am so sorry. Your post made me cry. I think your Furminator post was the first one I read. He brought us together.

I'm so sorry for your loss. I don't have pets myself except the deer that have taken up residency in my backyard, but I can certainly understand why your heart is so broken. I found myself getting teary eyed while reading your post and I pray that your heart will heal quickly.

I think the worst part is his sister waiting for him. It always make me so much sadder to lose an animal when another animal looks like it's waiting for it to come back too! Gwenstopher is 15 and the oldest cat I've had. When we were kids, we went through cats like water, they'd alawys get hit, so it wasn't such an emotional thing. I keep saying I'll be fine when Gwenstopher is no longer, but when something has taken up living space with you for that long.... wellllllll, it might be a different story!!

I'm so sorry. And all weepy. Poor kitty. Poor all of you.

(Also, I just had to click over the the butter eating post, because, um, my cats do that too. Well, they haven't knocked the lid off. Yet. But.)

So sorry friend....We just had to put ours down in July after 14 years. He was my husband's best friend. (They liked to spoon too!) My 4 year old still asks about him but, we didn't bring him home in the trunk so...no advice for ya there.
Big hugs...
best,
Tina

It is sad when we lose a pet :( They become a part of our family with their unconditional love. I am sorry for you loss.

It's so hard to lose those furry friends. Know that he is never truly gone as long as you remember him.

One of the reasons why I like visiting your blog so much is because it has become a daily reference I can use best pharmacy in order to learn new nice stuff. It's like a curiosities box that surprises you over and over again.