Skipper was gay. We all know it

From now on, when my father knocks on my door, I'm not going to answer it. First it was the legless people. Last night, it was this: 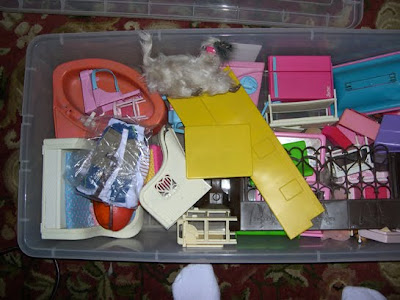 Tubs and tubs of Barbie shit. All brought up from the dark recesses of his water damaged basement. Corvettes and hot tubs, McDonald's and make-up counters. Vans, horses, dogs and cats.

Barbie had it all, thanks to my grandmother. She took great pleasure in spending her miserly husband's money behind his back. Nothing beats stealth missions with Grannie to buy Barbie a new wicker furniture set. We were bad.

Of course, when Junior saw all the bright sparkly stuff, he got excited and wanted to play with it. So I dusted the dolls off and let him have at it. 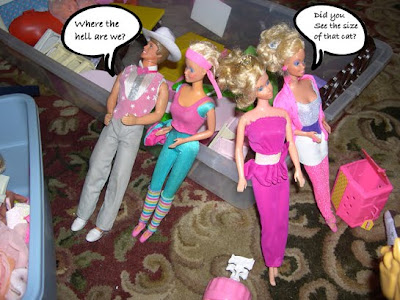 He had a blast. 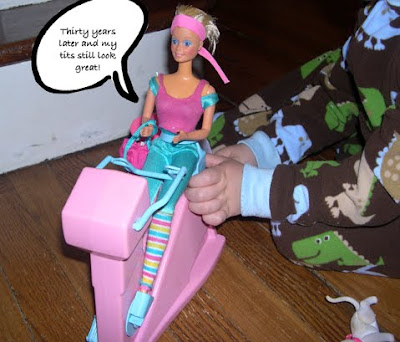 That made Chuck kind of twitchy.

His comment made me laugh. I think it's pretty normal for a father to be concerned with his son's masculinity, but to think that playing with a certain kind of toy could affect a child's sexual orientation is preposterous.

Still, I was curious what the world thought, so I googled "Does playing with dolls make boys gay?"

And how! According to "Boys Who Play with Dolls": "Studies have shown...that a desire to play with the 'ol gal [Barbie] might be an early sign of a boy's already determined sexual orientation. Robert Green, in his book The Sissy Boy Syndrome: The Development of Male Homosexuality, found that little boys who played with dolls were, in fact, more likely to grow up gay."

Holy shit. Chuck was on to something. Could Junior be mere seconds away from becoming Junior-ette? I clicked onward and ended up at the Landover Baptist Church. According to them, A parent can never act too soon in taking precautionary measures to ensure that their child will never become intoxicated with mommy's perfume and choose to devote his life to being a prancing homo.

They've even got Handy Homo Prevention advice right on their website.

Some days, the world scares me. And not in the Oh, I'll just have a glass of wine and forget about what I read/saw/overheard kind of way. Rather, in the Who am I sharing the planet with, please protect me, Chuck? kind of way.

* Pink wasn't considered a "girl's" color until the 1940s. Before that, it was actually considered a "boy's" color because it was related to red, and at the time, red was thought to be more masculine.
at May 05, 2010

Email ThisBlogThis!Share to TwitterShare to FacebookShare to Pinterest
Labels: Barbie and Ken, Skipper

This post is friggin hilarious. Thanks for the laugh. Perhaps we should thank your dad.

One cannot change a person's sexuality with religion, aversion therapy, threats, incarceration, or any other of the many, many "therapies" that have been tried.

I kinda doubt a little bitty barbie could do it.

Well, I just hope that if either one of my boys is gay, they turn out to be the "prancing homo" variety. That just sounds like a good time.

Tell Chuck that Junior probably just wanted to get a good look at Barbie's boobs when you weren't watching him. That should make him relax. By chance, did Barbie end up naked? My Barbies were always naked.

I'm sorry, but your posts are too funny. I love the "prancing homo" stuff from the church. LOL and ROFLOL!!!

It's a crazy world we live in, that's a fact! You got to learn to roll with the punches or ponchos, whatever fits.

Sorry if I burst your bubble, but you do know that Landover Baptist Church is a parody? It's completely fictional, albeit highly entertaining. :)

I thought "prancing homo" was your own little editorial spin.

Now that I know it's fake, I don't feel so bad for laughing. Heh.

It took me a bit to figure out that the Landover Church thing was a gag. But that's just because there's so much similar rhetoric that's actually sincere. And that's scary.

I would worry more about a boy wanting to date Barbie than wanting to be Barbie.

Oops. Landover Baptist Church is a parody? It seemed highly plausible that a church would put something like that out.

I can't believe that was on their site?!

Whether you agree or disagree doesn't matter - there's no reason to attach adjectives.

That's funny...my husband was concerned when my son wanted to wear a dress around the house because big sister was. I let him. It was cute.

I wonder what my boys would do to barbie and her pals who are lurking in my attic. Turbo would want her to date GI Joe and probably take off her clothes and giggle--he's that age. Bruiser would drag barbie around by her hair most likely.

Oh, man. Will LG have to take off the heels to be a homo? Because I just can't see him being able to prance in those 3 inchers he's become so attached to.

Parody it may be, but there are a lot of people who feel this way. Very scary.

There are some times I am just so glad to be a goat you cannot believe it.

And this is one of them. We goats don't worry about these things.

My brother played with dolls as did all the other boys on the block, they just called them action figures. I can't tell you how many times I can home to find G.I.Joe in bed with Barbie. I wouldn't worry about it.

I share your fear. They walk among us and they breed -- and vote.

It would have made so much more sense had we all be created bi-sexual. Double the dating prospects and one less group of people to hate.

That's all I can say about Landover Baptist Church.

I didn't think Skipper was gay, but I was pretty sure Midge was gay. That's why they didn't keep her around for long.

My husband almost had a brain aneurism when my son rode a pink bike. This sentence would be more effective if I knew how to spell anurism...er...aneurism....ah, crap. Whatever.

I get scared about the people we share this planet with as well... but it makes me feel so much better seeing that you feel the same way.
:)