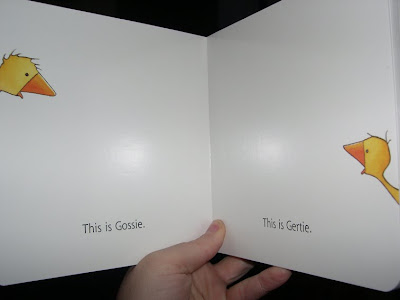 “Junior, this is Gossie. This is Gert—” 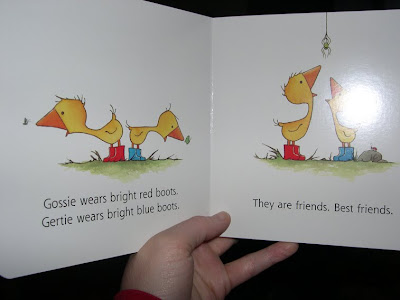 “—FRIENDS! Are they gonna eat that sider?”

"Why they gonna eat that sider?"

"I'm not sure. Sssshhhh. They splash in the rain. They play—"

"—Are they swimming outside? Is that Gossie?" 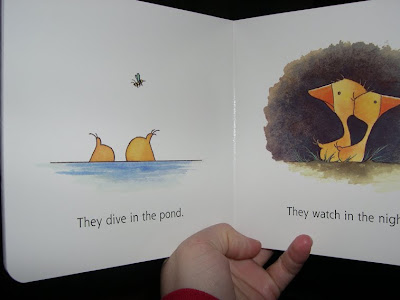 "—What's that? Is that a banana? Is that two bananas?"

"—Shhh, honey. They're under water. You can't see their heads. Let's listen to the story."

"Why they under water?"

"They watch in the night. They play in the—"

"—Yes. They're on the haystacks and they're talking. Ok? Now let's listen. Everywhere Gossie goes, Gertie goes too. 'Follow me!' cried Gossie—" 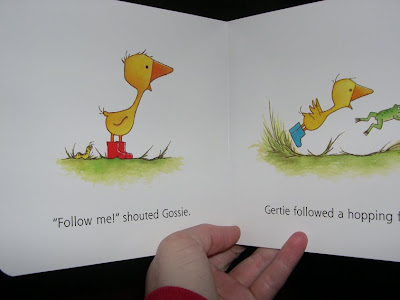 "She's jumping after the frog."

"Because ducks are good jumpers."

"Ducks don't jump. They SWIM. You're silly. That's silly. Is that a duck?"

"Sshhhh. 'Follow me!' shouted Gossie. But Gertie followed a butterfly."

"Because she wanted to see a butterfly instead."

"Because she likes butterflies. 'Follow me!' shouted Gossie, as she followed—"

Email ThisBlogThis!Share to TwitterShare to FacebookShare to Pinterest
Labels: Gossie and Gertie should make some new friends

Oh crap. I can only imagine what he's gonna say when he sees the Bingo book...

Insert sharpened pencil "A" in eye socket "B". Twist. Repeat.

What kind of name is Gossie for a banana anyway?

I am getting the same thing here with my four year old. One book can last all night long.

Reading to her at bed time proved challenging.

We have a rule around here. I read the first time and she has to read the next time ;)

It's supposed to be a good thing he's so inquisitive, right?! Right.

Okay, by "DAISIES" I was wondering when you were going to start skipping pages.

All sounds very familiar, though.

I'm laughing so hard! This is hilarious. Love it!

My son's new thing is asking, "What does that do?" every time we pass the cemetery :)

hehe he's a smart boy to ask so many questions. My kids aren't that spoiled. :P

The thing is--that's the kind of kid you want. Even if you can't go to the bathroom without answering 50 unrelated questions.

Pricilla, this time we're not puffin!

Lol that is great. My son doesn't do thank goodness. But maybe because I plow through books if he starts doing that.

I love that Gossie book though.

I'll admit, when I read to my daughter I would purposely skip pages just to GET ON WITH THE BOOK already.

And this is why there are audiobooks.

Preaching to the choir over here. Now I get, "Mama, turn book so little o see. He can't see. I can't see. Is that a tutle? Little o, that's a turle. Can you see the tutle? Mama, wait, he needs to see the tutle."

They say we should read to them daily. Does it matter if we only get through the first page of the book?

OMG! I soo know how you feel! I'm dreading the day that my 4 year old points out the fact that I've skipped a few pages...then what?! Right now that's my only saving grace!!!

Ha ha ha. There's a light at the end of the tunnel. They learn to READ!

I am LMAO because I FEEL your pain...and if it makes it any better for you, I listen to it in stereo with the twins and they double team the questions!!

i so feel your pain.

Reading this and reading the comments left by others... I am so looking forward to motherhood ;)

I'm sorry I can't commiserate - that's what I love about little kids - the questions and the tangents they go off on...

Hilarious because it is TRUE. Yep diluted version here too. Mostly "what's that?" "what's that there?" and a rousing rendition of the ABC song.

I was so glad when my daughter started reading. For this and so she could change the channel on the TV all by herself. I used to skip so many pages because it took so long and she obviously wasn't paying attention to the story. You'll get there, it might take a little longer but you are moving in the right direction.

Heh! You have to read him One Fish, Two Fish, Red Fish, Blue Fish.

That will blow up his little mind!!!

Thanks for ruining the ending for me.

I would just like to get to read an entire book. My son listens for a little while then just takes the book away and leaves.

OMG that's awesome. Did you record that and have someone transcribe it? Because that whole interchange sounds just about right on.

The alternative is what I had... a kid that wouldn't speak at all. Someone somewhere has a kid in between. Lucky lady. :)

I am just laughing so hard.....my husband and I HATE this book! You took the words right out of my mouth!