Who, but whoest, art willful enough to tackle thoust far reaches of the fridge? 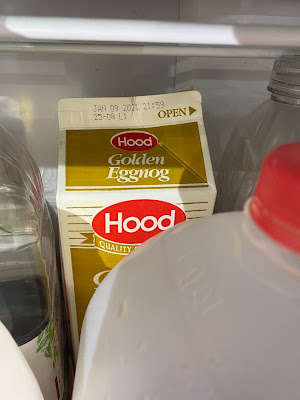 I've been looking at this container of eggnog since Chuck brought it home from the store mid December and officially announced it was "eggnog time." Junior drank one glass and remembered how he vomited up eggnog several Christmases ago.

After that, no one else drank any.

Recently, I started opening up the fridge and thinking of the famous William Carlos Williams poem, The Red Wheelbarrow. You know the one:

so much depends
upon

beside the white
chickens

I started thinking of my own Red Wheelbarrow poem:

so much depends upon

that no one else will throw away

because they are lazy pieces of shit
Sure, it's presumptuous to assume that the eggnog is still there because people in my house are lazy, but I could easily sub something else in for eggnog. An empty shampoo bottle in the shower. A wet towel on the floor. A lone sock under the couch. Dog vomit on the rug. A Lego head under a chair.
When you are the default parent (I fucking love this article), you see all and handle all.
You are exhausted and sometimes — oftentimes — depleted by It All.
Could I ask someone to throw it away? Sure. But it's so nice not to ask. To assume that maybe, hopefully, someone in your household will too see the things you see.
So yes, so much does depend on the old eggnog. And I'm taking bets on how many holidays and/or seasons this chappy back row fellow will now join us for.
glazed with refrigerator dew
beside the white eggs
at January 24, 2021

Suet. Everyone's doing it. Especially if it's wad shaped

We eat more meat than I'd like, but we have three sons and it fills them up so for now, I make meat. Sometimes there's fat leftover ... 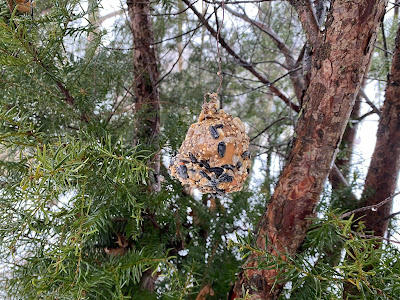