How I finally caught the babysitter stealing 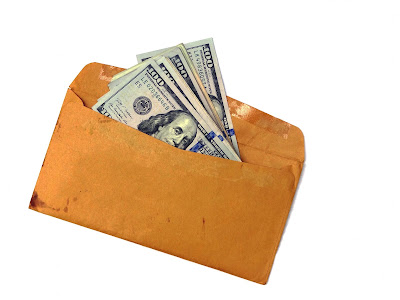 A few weeks ago in Mulletville Lite, I told you how I had begun to question the integrity of our babysitter, Kim. I believed she was stealing from us. I was right.

What follows is how I finally caught the bitch.

If you remember, I hired a new sitter because Kim was soon to depart the United States for a nannying job abroad. I still had Kim babysit here and there, however, because I knew she needed the money for her trip. (Can you hear the Universe laughing at me?)

One Monday, I had Kim come so I could run errands. I hadn't thought about the missing money in a long time, mostly because I'd been more careful with our money. We all had. Junior got birthday money from a relative he hadn't seen in awhile, and we'd put it in a sealed envelope in my bedroom. On the envelope he'd written "Junior's birthday money" in his child handwriting.

Again, I close my bedroom door every time I leave the house, and I'd naively thought that was enough of a deterrent.

Before I left to run errands, I saw that Chuck had emptied his wallet and left $180 on the bureau. I looked at the money and got goosebumps. It was surreptitious placement. I'm going to leave that there, I said to myself. If it is gone when I come back I will know that the wind didn't blow it off my bureau, Cam didn't throw it somewhere...I will know it was stolen.

When I came back it was gone.

Even worse, the envelope with Junior's birthday money was gone too.

I called Chuck. I was shaking. I thought I might throw up. I was filled with disgust, with rage and with disbelief. What a con artist this young woman was. Chuck said he'd drive home so I didn't have to confront her alone, so I stood in our bedroom and watched out of the window as Kim played with Cam.

About an hour later (!), Chuck pulled into the driveway. He took Cam into the living room and I calmly asked Kim about the missing money. At first she denied it. She even offered to help me look for it. Then Chuck walked in and told her we had the whole thing on video.

She looked down and pulled the $180 from her pocket.

"We don't want to hear it," I said. "You have 24 hours to return all of the money you stole or I'm calling the police."

Her face lost all color. It was the first time I'd seen any indication that she understood the magnitude of her choices. She begged us not to involve the police. She promised she'd have the money. And she did. She returned it the next morning, along with a pathetic letter of apology that blamed her thievery on fear, needing money for a relative's medical bills, debt, and so on. But I know the truth: She wanted to pad her pockets for her upcoming trip abroad.

It's been just about a month since this went down. I cut off all ties with Kim on social media, though for awhile I tormented myself by looking at her accounts—waiting for some indication that she felt remorse or regret or anything in that family, but there was nothing. Just selfies. Excitement for her trip. More selfies.

I guess that's the real offense of this experience: Even though I didn't commit a crime, I am the one dealing with a crisis of conscience. I'll forever regret not calling the police, only because I don't feel she learned a damn thing. But I wonder if it would have been worth it to involve them, to upturn a 19-year-old's life.

The kids asked about Kim for a few days, then she slipped from their minds. The new sitter is a dream come true, but I only have her come when I'm working from home. It took weeks to switch my brain off this topic. I relentlessly pursued the imagined details: Did she steal when Cam was napping? Was she so brazen that she snooped around my bedroom while he played by himself?

My bedroom felt sullied. Tainted. No longer a safe or enjoyable space, even though I rearranged the furniture.

"Stop torturing yourself," Chuck would say. "None of that matters."

I guess he's right. No point in lingering in the unpleasantness, when the outcome could have been much worse.

I thought I'd feel a tremendous sense of relief the day Kim's plane took off, but life doesn't work like that. I feel better than I did, but I'll never trust anyone in my home again. Chuck and I are the dumb luckers who had that sitter. We are the cautionary tale. The learn-from-our-mistakers.

And to think that Kim was supposed to be an upgrade from the previous sitter—one who kept accidentally texting me things meant for her boyfriend. Yep, those kinds of things. But that is another blog post in itself.

P.S. I have contacted sittercity.com and care.com and they have removed Kim from their websites.
at October 23, 2017

Yikes!! I hope when people are asking for sitter referrals on the local FB you PM people that get "Kim's" name. You may need to let me know, since well, I refer to those referrals too ;) glad you got your's (and the kid's) money back, doesn't make the situation any less crappy.

Wow!! I am SO glad you figured it all out AND got your money back, but I can only imagine how violating that must feel. I hope the icky feelings will subside soon. And good job for reporting her to those websites so she can't take advantage of others through them.