It's time to snuff the puffer

Something incredible happened this weekend: I went somewhere in the vicinity of Mulletville, and I have nothing bad to say about it.

I won’t lie. I’m kind of bummed about it. Cheery posts devoid of mullet sightings are diametrically opposed to the raison d’etre of this blog. The mullet carnage feeds me.

Alas. We must grow beyond our own fences.

So, here goes. Gigolo—I mean, Chuck—and I took Junior to Mystic Seaport. Chuck’s been trying to get me to go there for ages, but I always put up a fight. Not only do you have to pay $24 to get into the seaport, but you have to walk through an entrance gate and once you’re in, you’re in (they shackle you with wristbands and everything).

That only means one thing: let the price gauging begin.

You know exactly what I’m talking about. Once you’re inside anywhere lately, cups of ice are $15. Hotdogs are $35. A beer is $99.99—and it’s not even good beer; it’s Bud. They know you’re hungry, thirsty and trapped.

But honk my hooters, the seaport didn’t try to financially rape us. A respectable beer was $5 (if you wanted Bud, they were giving away free samples in the restroom). A 30-minute boat ride was $5.50. Heck, they even let us put the entrance fee we’d paid toward a year-long membership. Plus, they threw in a free hat for Chuck.

They were nice (like, I'm getting misty). In Connecticut, that's practically unheard of.

But the very best part of the whole day was that it was a gorgeous sunny day in Connecticut and the place wasn’t mobbed. Look, there's hardly anyone around: 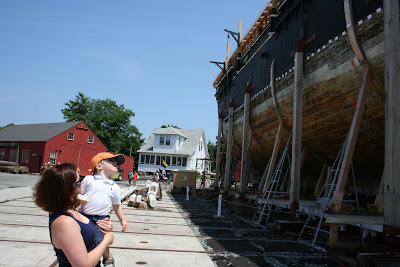 If I were a gusher, I’d gush. Look at the crusty ship innards we were able to experience: 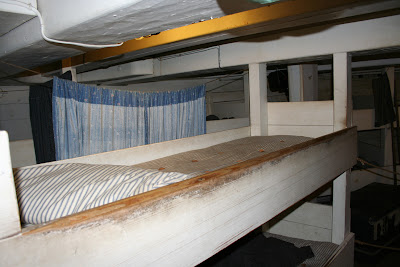 If you’re from Connecticut or visiting Connecticut, I highly recommend a trip. The bathrooms aren’t a mangy afterthought like some other places in Mystic, and you could easily spend more than one day in the seaport with children of any age. There are kids’ theater performances, anchored boats to play on, a children's museum on-site, horse-drawn carriage rides, old fashioned shops that do more than sell tacky t-shirts, etc., etc. Look, more boats: 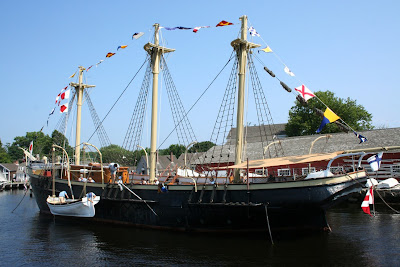 My only regret is that before this trip, I had no idea that my two-year-old was a Thomas the Train droid. There were hints, to be sure, but nothing worrisome.

Now? Now I am scared shitless. While at the seaport, every boat whistle elicited a “Thomas is puffin!” from Junior. Planes in the air were Jeremy; helicopters were Harold. While aboard a boat, Junior was convinced he saw Salty and Cranky by the docks. When the steamboat captain yelled, “Let’s get going” before the boat tour, Junior turned to the woman next to him and said, “We’re going to the Island of Sodor!”

If I hadn't been sober, I might have believed him. He was so convinced.

These little trains are evil. Just look at them! I know they're plotting to kill me in my sleep.

Email ThisBlogThis!Share to TwitterShare to FacebookShare to Pinterest
Labels: Thomas the Train, why must the songs be so catchy

In spite of the lack of mullet carnage, you entertained brilliantly. And now I want to go to Connecticut to visit the seaport. But I don't think I'll accept any Bud samples from the restroom...

Yes, you might want to lock those little trains up at night...just in case. ;)

The trains scare me, but not as much as Jay Jay - the plane with a human face. Just sayin...

I loved Mystic the time I visited it. The hubby and I had a grand time. It was 104 years ago though....

girrrrl you are sooooo funny I could disect this entire post with where I was LMAO...

Glad you had a nice time and that you didnt have to pay 99.99 for pee errrr beer

"We're going to the Island of Sodor" Those words strike fear in the heart of parents everywhere...

I think I would LOVE that place. Old crap including ships are right up my alley.

That is totally somewhere our dad would have dragged us as children. For HIMSELF, mind you.

It would have served him right if we'd turned out to be Thomas the Tank droids.

The scariest things about those trains are the inane grins. They freak me out too. But Sodor? I don't remember that being in the stories? Is this a modern day version of Thomas or was I not paying attention?

I'd take Thomas the Train over Wonder Pets any day?

I HATED Thomas the Train. I agree that the little trains have some sort of nefarious plot to overthrow the government and take control.

Before you know it, we'll all be living on the Island of Sodor and we'll be forced to use good manners and grin like morons.

thank goodness we haven't developed a fascination yet but i already know that yo gabba gabba is not a friend of ours.

We love Thomas around here!

Thomas the Tank engine ain't evil. Bob the Builder might be...

How to Party with an Infant said...

Those trains are totally scarier that vacant-eyed dolls and price gauging.

I could send you a bunch of tracks and extra train cars to go with your Thomas collection. ;-)

If you come out to California, you have to check out the USS Hornet. I think that's the name. An old air ship turned museum. Pretty cool.

Is your hubby doing a show on the Discovery channel called Hauntings?

Just wait until you have a girl. Those 'Little Petshop' characters are pure evil. They exist for you to trip over. Don't even get me started on Barbie....

I loved Mystic Seaport when we were there years ago.

The seafood restaurants in the town, however, stole the show.

Thomas stuff is great, it's the prices that are evil. My grand daughter loves the Thomas series, but those darn toys cost a fortune. I can't believe how many your son has. I look for them at flea markets and yard sales.
Her real addiction is the Toy Story characters. We re-enacted a scene from The Exorcist trying to get her into her car seat without her Mr. Potato Head.
Your trip to Seaport looks like fun, but I live too far away, shucks.

I HATE Thomas the Train! But, it's a hell of a lot better than the shroomed out Teletubbies.

At least now you know the extent of his addiction, good luck finding a TA in your area.

And those little trains, if they were manufactured in China between 2000 and 2004 could also be killing little Junior. It's a cruel, cruel world we live in. Free beer in the bathroom? I'm game!

Their faces are kind of creepy ... I'll bet dollars to donuts that it will be impossible to destroy them. It would be like the cat that kept coming back ... (Note to Self: Do not buy Shelby any Thomas the Train stuff.)