I’m finally back from the David Gray concert in New York City. Yes, that was Saturday night and today is Tuesday, but I fell so in love with David Gray that I decided to sit on top of his tour bus for a few days, just to be close to him.

In a few words, underpasses suck.

I didn’t need my husband’s athletic cup during the show, but I could have used a sweat guard. We were in the third row and I could practically see the sweat flying off Mr. Gray’s body. Unlike Hunk-o-mania, I jumped up in the air to lap it up.

Yes, I am that much in love.

But like everything else, once something good crosses the border into Mulletville, it turns to shit. So now instead of basking in the warm glow of my newfound amour, I am hobbling along with my head down.

Why? My knee is busted. 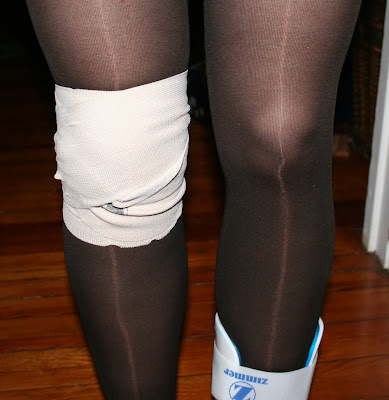 I get sharp shooting pains when I walk, and I don’t know why. Perhaps it’s from carrying a 40-pound toddler? Perhaps it’s from running through the halls of work and trying to compensate for my still-healing sprained ankle by hopping on one leg?

Or maybe—and I think this is the most logical—my body dislikes Mulletville so much it’s decided to simply fall apart.

I’m being serious, here. I need a change. I’m in a big, fat funk and I don’t know how to get out of it. All I know is that the present situation isn’t working. My work environment is toxic. It’s a matriarchal system gone horribly, horribly wrong. My hometown depresses the hell out of me. It gets dark after lunch (slight exaggeration, I guess). I miss my son. I now limp on both sides of my body. And every Monday I sit next to a guy in a meeting whose Thoreau coffee mug always seems to be pointing at me. It reads: 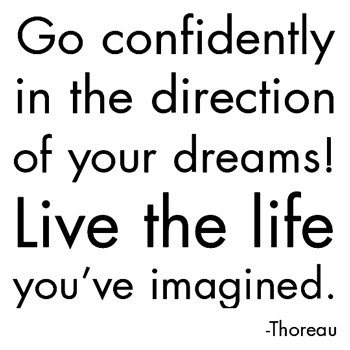 Which makes me think of Oprah’s saying:

"If you do not listen to the smushed finger and smashed car door, you will then get a smushed toe, and if you don’t pay attention to the smushed toe, you will get a sprained ankle, and eventually if you ignore that you will get a busted knee and pitiful case of woe-is-me. The first hint of a mullet, the first hairdo that is business-in-the-front, party-in-the-back, pay attention!”

Now look, I’d much rather lend my ear to Thoreau than Oprah, but the woman’s got a point. I think the Universe has been shouting at me (and my finger, toe, ankle and knee) for a while. I’m not sure what we’re going to do but holy shit, if I’m still blogging about my same woes in six months (or if I'm typing with a salad tong taped to my shoulder because I've lost my arm), I will end this blog.

Email ThisBlogThis!Share to TwitterShare to FacebookShare to Pinterest
Labels: what the frick is going on?

You know, you could make A BLOODY MINT writing captions for mugs. Do it!

Here and now I make this vow!

If we ever see that you're reduced to wearing your husband's athletic cup in Mulletville, we'll come and kidnap you. . .

Seriously? Do you realize that I am in the area of the corporation Zimmer -the brace you are wearing.

Do you realize that I am invading your blog - one picture at a time.

You should just come live by me - you'll get a "within an hour radius of Zimmer" discount.

And I won't attack your crotch...

You have become quite the broken-down-gimp! I think the whisper was telling you to wear pads and other safety gear. Grab a helmet, girl...there's no telling what's next. And with a helmet on, there's no way you're getting a mullet cut.

Get better soon! Or drink lots of wine until it just feels better.

You limp on both sides? hmm... Have you attempted levitation as an alternative form of transport? You could get a high tech hover chair like Xavier from X-Men.

You could also kidnap Dr. Scholls and have him make you a full body insole.

*laughs hard enough to almost hurt himself, but doesn't*

Glad you enjoyed the concert but very sorry that you are falling apart piece by piece. It definitely sounds like you need a change.

The question remains...which is better? A punch in the crotch or a busted knee?

And how does David Gray's sweat taste??

I hate you all for making me laugh. I'm trying to be miserable, thank you!

Glad to know I'm not the only klutz in the universe. Well, OK, I used to be, but not as much anymore. You seem to have taken that title fair and square. I'm sorry. :)

At least you got to enjoy a concert - did you think to bottle any of that sweat flying around to sell on eBay to pay for your medical expenses? ;)

Ah FIMF, I am really sorry for your misfortune (you klutz). We are all rooting for you (especially that salad tong trick - that'd be neat)!

I'm sorry Mulletville hates you and is taking it out on your joints and appendages. Does the Universe ever send you winning lottery numbers in addition to your various injuries? Cause that could be your ticket out of there.

I have no idea who David Gray is.

Oh, I am so sorry about your knee.
You could come out here and be a goat farmer with me.

I can not believe you have sustained ANOTHER injury.

I think if you stay in Mulletville you are going to have to invest in bubble wrap. A bubble wrap suit that is...

I still don't know who david gray is.

I can't wait to find out what you happens in the next 6 months.

I do believe someone is trying to tell you something.

I'm going to check out David Gray's and his "freaky neck" as Mo says.

Ohhh... you poor thing! I swear girl, if it's not one thing it's another - I'm so sorry that your all beat up - and I hope that you heal real soon and can get back to your zexy self! :o)

If I catch you typing with a salad tong, I will end your blog for you.

However, you might then become the subject of mine.

It's Blog's way (I mean God's) of punishing you for ever listening to Oprah.

AWESOME! I think you are my soulmate. :) I currently have a broken wrist that won't heal, a bone fragment in my foot that may or may not start floating again and put me back in crutches, and now an "impingement" in my "good" shoulder that I have to have checked out today. Good grief. I didn't want to tell anyone that I also totally crashed and burned while jogging with the dog this weekend... nice bruises on the knees with that one. (jerky big scary dog that lunged at us, slammed against a fence, and sent my dog and I into a startled slow-motion fall onto gravel...) HA
We must be hard core babes, right??

Hm. Yes, I do believe you may be on to something, there. Though I wouldn't give Oprah credit for anything, if I were you. That's how she owns your SOUL.

get out your resume! what kind of work do you like to do and uh what are you trained to do?

Ruts suck - I hear ya. Come to Canada! It gets dark here just after coffee break 'tho.