I don't want to get gonorrhea from a California Roll 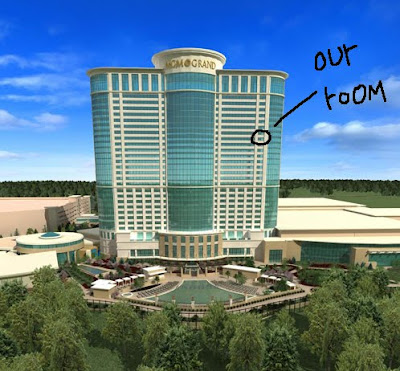 Last night, my friend and I spent the night at MGM Grand at Foxwoods. Ain't it purdy?

Before we hit the craps table, we decided to grab some sushi. Little did I know, I was about to experience foodgasm part II, though for entirely different reasons. In the year and a half since I'd last been there, the sweet little sushi restaurant known as Shrine had become...

Holy bustiers and ass huggers! Holy boobs and crotch shots! The waitresses were popping out of their outfits. And when I say outfits I mean plunging bustier-halter thingies and "skirts"

The waiters, on the other hand, were dressed conservatively in black dress shirts and pants.

As we ate, couples stood by the door and perused the menu. It went down like this: Woman looks at menu. Man starts to look at menu but is distracted by flesh parade. Man grins and gets really, really excited about menu. Man grabs woman's elbow and quickly ushers her into restaurant.

Such sushi enthusiasts, these middle-aged men.

Now look, I'm no prude, but my friend and I breathed a sigh of relief when we got a male waiter. As my friend put it, "I feel like the waitress wants us to look THERE but I don't WANT to look there."

I want to be clear here. I wasn't offended. I'm a big girl and I understand that having half-naked waitresses means you'll sell more sashimi. But Jesus, I'm so sick of smut. Every day I thank my lucky stars I don't have a girl. Riding the pole seems to be the new cheerleading. Girls' role models are hussies. I worry I'll be splattered with bodily fluid when I flip past MTV.

Where was I? Ah yes, sushi. As we were leaving, we asked the waiter why the hookers were fastidiously dressing the tables and setting out food.

"The milkshake song," my friend groaned.

Email ThisBlogThis!Share to TwitterShare to FacebookShare to Pinterest
Labels: I'm embarrassed by my sex

I could only listen to about 10 seconds of that song...so annoying.

I love that you apologized to your brother. :)

I don't know this song.

Why don't they put the men in provocative outfits? Don't the women deserve the eye candy?

Never heard that song... wow - she sure does have a milkshake. Or is it milkshakes? Or her milk shakes? Just wait till she has had a few kids and turns 40 - when she shakes she will be applauding herself on her much rounder belly!

This is exactly why I am gonna get into roller derby...show my daughter how it's REALLY done ;-)

If they are milk shakes, does that mean she's lactating? Cause that changes everything.

I can't say I agree with Pricilla about seeing man candy. Somehow it does not work the other way all naked like for me. But that milkshake song is awful.

Since I have a boy and a girl I know we're to suffer with double standards slapped in their faces and have to deal with the overt sexuality that is peddled over all the media. Sad.

For some reason I'm not yet worried about my infant twin girls being twisted by popular notions of femininity. I guess I still think I can keep them isolated from that world, even though there's a pole-dancing gym a few blocks from our house and one of the girls already likes to writhe around while holding onto a chair leg. Also, I often sing the milkshake song while my wife performs her breastpumping ritual. Maybe I should worry a little bit more.

I have a six-year-old granddaughter who was demonstrating the "model walk" for me this weekend.

You're right to be glad you have a boy.

My daughter and her friends were listening to music the other night. They were pretending to be pole dancers. We had a long talk. She's only seven.

What can we do? Destroy all the poles? Tney'll only come back taller and stronger...

Geo-ignorant question. Where is Foxwoods?

Kelis' milkshake brought all the boys to the yard, like, 7 years ago. So what thing of hers has brought the boys anywhere near the house lately?

I knew there was a reason why I don't trust sushi.

Foxwoods is in Mashantucket, CT.

now i'm gonna have that song stuck in my head. thanks for that.

Wow ... I do know that song, I actually used to love it. Not so much any more. I have 2 boys and 1 girl and dread the day she gets older and has to be around this, I don't want her dressing like that!