The other kind of puffin'

It’s hard for me to understand addiction because I don’t know what it feels like to not be able to say no to something. I’ve been sitting here trying to think of one thing I’m addicted to, but I can’t.

Sometimes I feel kind of boring.

Then I think of the alternative: Chuck. (Poor Chuck. He’s like my little blog lab rat.)

Seven years ago, on Chuck’s 30th birthday, he and his best friend made a pact to quit smoking. The stakes were high. I told Chuck’s friends that after that day, if they could produce physical proof of Chuck smoking I would give them $500.

Chuck made it three months.

I didn’t have to shell out a dime because I caught Chuck red-handed myself. And truthfully, I never would have paid those idiots any money anyway. But dammit, the last few years have been painful. Chuck’s tried everything. He’s been hypnotized three times. He’s tried the patch. The gum. He quit cold turkey. Hot turkey. Turkey with giblets. Weird herbal supplements. You name it.

Contrary to what I’d hoped, that didn’t help Chuck quit. I don’t smoke, but I learned that if there’s anything that makes you want to smoke more, it’s a crying newborn and a hormonal wife who’s recovering from C-section complications and having trouble breastfeeding.

In Chuck’s defense, he’s whittled his habit down to 2-3 cigarettes a day. But of course, I want him to quit completely. He’s pretended he has, but hello, men who are all too eager to run errands at strange hours are clearly hiding something. Especially when they come home reeking of hand sanitizer and have enough mint gum in their mouth to stuff a sausage.

Besides, I do the laundry and we all know the truth comes out in the laundry. 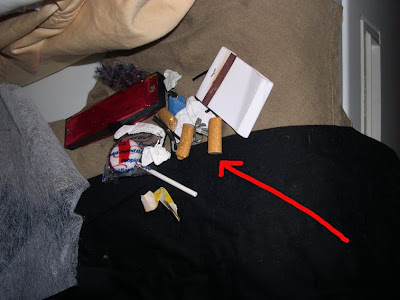 Then, today, I went to plug my phone in when I saw this: 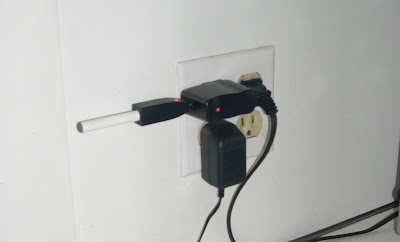 It's Chuck newest effort. It's an FDA-approved electronic cigarette. 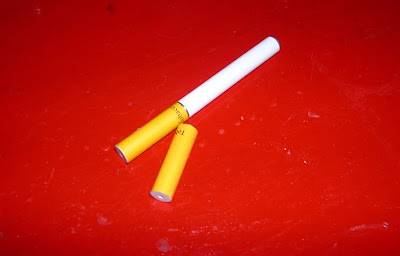 It goes without saying that I really hope this works. Chuck says he can already tell his cravings are less, but I've heard that before. It's hard watching someone struggle with addiction. I wish I could stop for him. I wish he had a non-lethal habit like picking his nose or knitting. I wish he'd never started.

Most of all, I wish I could quiet the voice that says, Here we go again. Chuck's inability to kick his addiction is turning into my addiction; there are better things to be addicted to.

Peppermint Patties and Hugh Jackman come to mind...if I had to randomly choose.
at June 06, 2010

The male person smoked before he met the publicist. But it wasn't a lot.

She was young and foolish.
But she won.

I hope this works for Chuck,
My mother smoked herself to death and it wasn't pretty.

My friend just lost her 52 year old mother to lung cancer with bone mets on May 11, 2010. My friend is now trying to quit too.

I really hope this works for Chuck.

Oh man, I feel for Chuck. I struggled with cigarette addiction for years. Quit for two years while I was baking babies, but went back to it when the little one was 6 months old. I quit this January, and am actually not struggling this time...I went cold turkey, and seriously, if you can make it six solid months without a hint of nicotine, it turns something off in your brain where you don't even want it anymore. I wish Chuck the best of luck, and you are a rockstar for being so supportive!

My mom smoked and it sucked. The towels smelled like one big cigarette growing up.

She doesn't smoke now. She has Alzheimer's and forgot that she smokes.

Maybe you hit Chuck over the head and he could get amnesia. It could work, but you could risk having all memories of you being wiped away.

I quit cold turkey when I found out I was pregnant with Girl Spawn. Hubby kept smoking til Girl Spawn was 6 months old and then he quit using Zyban (Xyban?). It worked for him. But it was hard.

I hope this works for Chuck. It's a horrible thing to be addicted to.

A co-worker had great success with that electronic cigarette so hopefully Chuck will as well. If not, one tip my doctor gave me (during my most successful attempt - 6 months) was to wear a patch and then go ahead and have a smoke... You quickly associate smoking with puking.

Good luck to Chuck on quitting. Nick is three months into no chew now. He is managing with Nicorette. THis is his third try at quitting. I'm really hoping this one sticks. I'm rooting for Chuck!

I believe the number of times my husband tried to quit, before he really decided to quit, top off at about 22. Or in that vicinity.

It's a hard habit to break, those nasty cancer sticks.

When the smoker in my house whined that nobody understood how hard it was and if I was more supportive he'd finally be able to quit, I reminded him that it was his fingers yanking the damn cigarette out of the pack and if he really wanted to quit, he'd man up and do it. Because I am sympathic like that. And whining men really annoy me.

But he finally DECIDED, wholeheartedly, to stop smoking. and he hasn't had a smoke in over 3 years now.

Good luck to Chuck. And I suggest a new supply of Xanax. Hopefully Chuck is not as surly as my ex-smoker while trying to quit and you won't need it.

good luck. My husband went the wellbutrin route. did you know it will help you quit smoking plus be happy.

I agree with you, on both the smoking and Hugh Jackman.

Mr. Blognut bought one of those electric cigarettes, too. It's in the cupboard.

I don't think he really wants to quit very badly.

Hope it works for him! What a hard habit to quit.
My mom finally quit and says she's starting up again once she reaches the average life expectancy for a woman. Since she's then on 'borrowed time' anyway she says she wants to enjoy herself ;)

I smoked in my teens and 20s, I don't think I was ever really addicted, I just enjoyed it. Quitting wasn't hard, but I still feel like every now and then I could really use a cigarette.