I don't know why there's so much effing laundry. Yes, there are five of us, but we aren't going anywhere.

Part of me feels smug like, Yah, we are so on it we get dressed just because. The other part of me is muttering under my breath WHY THE HELL IS EVERYONE WEARING SO MANY CLOTHES DURING A PANDEMIC?

Today, as I carefully balanced another load on top of this leaning tower, Junior walked in and asked if he had any clean underwear. I pointed to a wad midway down and told him to get it if he dared. He reached in and gingerly retrieved his briefs while I begged him not to knock it over.

The premise is the same: you reach in and grab what you want — all the while trying not to knock down the tower. The person who knocks it over has to put all the laundry away. If you try to flee the scene of the crime, you have to wear Chuck's dirty socks around your neck like a necklace and sleep with his smelly socks under your pillowcase.

Why didn't I think of this sooner?

Shakespeare may have written three of his famous tragedies during turbulent times (blah, blah, blah) but did he create Laundry Jenga? The answer is no.

The Day of the Flying Popcorn

See, Kid #2 (age 10), having seen a lunch box on the counter, tossed it into his backpack without knowing there already was a lunch box i... 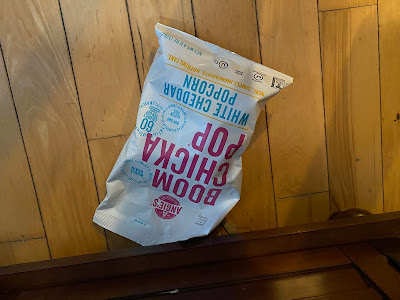