Summer BBQs from the outskirts...could someone bring me a beer already? 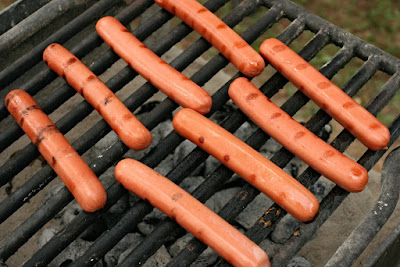 Every summer we go to the same BBQ at Denise and Matt's house for the fourth of July.

We've done it since Junior was a baby and yet, even though I've met and re-met all of their friends for the last 10 years, I've never been able to click with anyone...besides Chuck.

But Denise and Matt are Chuck's favorite friends, and he wants to talk to them. And Chuck is a social butterfly who sees me all of the time, so he doesn't feel like "clicking" with me at the BBQ. Unless it's horizontally — which, considering the gaggles of children running around, would be really inappropriate.

Besides the sort of unfriendly/slightly off crowd and the running children there are also goats, ducks, dogs, cats and rabbits. When I'm not following Chuck around like a lost puppy, I am reminding my kids to watch out for poop droppings from multiple species of animals. 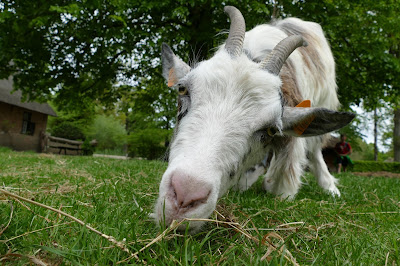 Or I'm reminding my kids to slide down Denise and Matt's playscape slide ON A TOWEL PLEASE, otherwise, their shorts act like a paper towel and soak up the years of grime that's embedded in the slide, and they end up looking like they have track marks up their backs.

By the time we get to the fireworks a few hours later, which send all of the kids and animals into a frenzy — can you picture it? All of the shrieking, baaaing, quacking, barking, meowing and squeaking while the inebriated adults holler? — my nerves are shot.

If you can't tell, I really dread this BBQ.

My one saving grace has been my children. For the first two years we went, after I made nicey nice with all the fellow guests, I followed Junior around the BBQ. Toddlers never sit down, and neither did I, which meant my small talk consisted of "Ooops, there he goes again!"

So that's where I was this year: following Cam as he said hello to the livestock. As he inspected the trees in the yard for worms — "WOHMS"— and bugs — "Is it dead? Can I touch it? Can I see it? Is it fywin'? Is it jumpin'?" As he played with trucks in the yard. 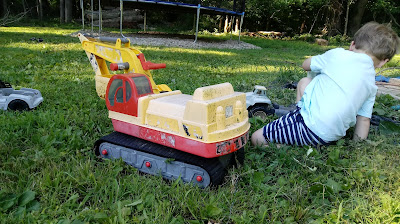 Along the perimeter of the property, he and I were quiet onlookers. I sat in the grass with him. I was content. He was content. 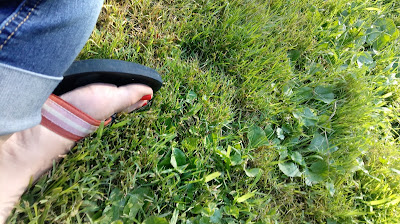 If I had been sitting alone, Chuck would have given me "the look" and I would have felt guilty (sort of) and tried to make lame conversation with another mother about fruit snacks or cavities or sleep regression — all those stupid parenting conversations. But it's rude to sit alone for hours at a party. I get it. Unless you're drunk and conversing with the trees. Or ants. Then it's okay.

But there, alongside Cam, I wasn't rude. I was a diligent parent. I thought about how, for those of us who are on the shy side or don't click easily with people, a young child can be a blessing in disguise: guilt-free permission to avoid small talk or a reason to leave a dying conversation. Permission to remain on the outskirts.

I wondered about next year, when Cam is four and eager to play on his own more. I wondered about Denise and Matt's BBQ and about all the functions ahead, when I won't have a trusty sidekick with whom to sit in the grass and look for bugs. When I won't have my guaranteed "friend." I'm not ready to let it go and yet I don't really have a choice. It's the progression of parenting. They slowly learn how to walk and then they slowly walk away. Or they run, depending on their dexterity.

I need a tissue! This growing up shit is hard.

So is picking goat turds out of the grooves in my flipflops.

Email ThisBlogThis!Share to TwitterShare to FacebookShare to Pinterest
Labels: BBQ with toddlers, kids in the dirt, looking for worms, shy people with kids