Things you [probably] won't see on the NutriBullet box

Let's talk about how I just gave Everett and Cam a bath together, instead of Everett and Junior, which I've been doing for four years. It was like a changing of the guards. I kept thinking, Where's Junior? (He was playing Minecraft.) Everett didn't seem to grasp the emotional magnitude of the moment (i.e., he didn't really care that I'd swapped one brother for another, all he knew was that he was suddenly the Big Cheese in the "deep end"), but I was lamely choked up about it.

Everything is changing. Everything.

Chuck poked his head in at one point, and I was about to share the sappy moment with him when he said, "Why is my NutriBullet cup in the bathroom?"

Actually, he kind of spat it.

There was no denying it, there it was: 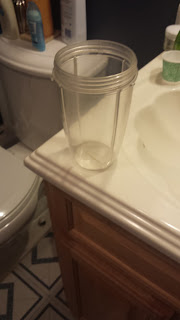 "Of course," I lied. It's not like it's just taking up space in the kitchen cabinet. "Of course!"

My mind immediately went to the conversation I'd had with Chuck's best friend—the one who wanted me to take ski lessons, even after all I've been through—about his NutriBullet.

"Mrs. Mullet," he'd said, "the NutriBullet is so effective I don't even need toilet paper anymore. Not.One.Single.Sheet. My poops are that perfect because of it."

It wasn't my fault I'd brought the NutriBullet into the bathroom. It was Perfect Poop's fault. He'd made the association, not me. If it wasn't for him I'd think of vegetables when I saw the NutriBullet, not poop pellets and bathrooms.

A sea of chatty children separated us, followed by a sea of cats and dogs, laundry and homework, dinner and dishes. Explaining the Perfect Poop story to him would take hours.

"Can you just read my blog sometime?"

(And until you break out the broccoli I'll probably keep using the NutriBullet in the bathroom.)
at September 30, 2015

I love your blog. I rarely get over here (even more rarely than I update my own blog, and no, that hasn't happened, so don't feel obligated to pay a return visit) but when I come it's always delightful.

Thank you for a high quality and consistent blogging experience.

And now I'm wondering where the heck my nutribullet cup is and perhaps more importantly, HOW did you get your husband to read your blog? My always looks shocked when it gets mentioned and then he forgets about it for like, five years. Sigh. Kiss your man.