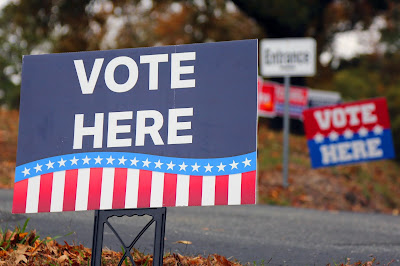 I really haven't broached politics on this blog, except for the time the kids and I vomited during Trump's inauguration. I didn't want to go there again, but I just slid out of a tree, and I need to talk to someone.

I won't name names, so I'll say that Chuck likes Candidate A. I don't like Candidate A much, but I don't care for Candidate B either. I will say that the media bias against Candidate A has made me embarrassed to be a journalist, but there are many, many things that embarrass me about our society — trying to teach my three sons to respect women and not objectify them against the backdrop of Cardi B's "WAP" being one of them — so I'll leave it at that.

Then, someone shouted "YOU'RE A PIECE OF SHIT" at me as I got the mail, as my five-year-old stood next to me.

So here I am, working from home, looking at my lawn, which has become a somewhat accidental tribute to Candidate A. Among the signs are inflatable Halloween ghosts and goblins, carved pumpkins and puffy mums. Pretty autumn leaves. I'm trying to concentrate on those, but like I said, Chuck has put up a lot of freaken signs.

This morning, after Chuck left for work (he has his own work space and wears a mask 24-7, in case you're wondering), I decided to take a few of them down. I grabbed a large steak knife (maybe it was more of a cleaver) because I don't know how to use a power drill to unscrew things, and I climbed a tree so I could reach the top of one of the signs.

I figured I'd cut the sign enough that it split apart, then I could rip it down.

It's raining, though, and my shoes were wet, so all I really accomplished were a few large slashes through the signs. It felt satisfying, but those fuckers wouldn't budge.

We live on a busy rode, too, so while I was slashing away, people started honking. I could see the headline on the news: "Local woman takes cleaver to spouse's political signs in act of defiance." Or, depending on what news source you fancy, "Local woman lovingly carves hearts into spouse's political signs to show support of essential workers, LGBTQ, mini hotdogs, migrant children, and one-legged dogs."

I was making progress until I lost my footing and slid down the tree. Thankfully I fell away from the road, but the cleaver landed 0.000001 inches from my foot and I almost fell ass-first onto a broken limb, and I'm really not a fan of do-it-yourself colonoscopies.

I sat there for a moment. Wet. Shaken. Waiting for someone to huck a bag of shit at me. I remembered something I read in the comments section of a Psychology Today article (the article mentions Trump in the headline, but it actually contains tips to survive a relationship as politically star-crossed lovers).

Someone wrote: "...you and your husband each despise the other party and candidate, but love each other. Which, arguably, is the most important thing."

Neither of us adore the candidates enough that they're in bed with us. We've had supporters of both candidates to our home — socially distanced — and it's never been anything but civil.

Friends have joked about throwing the signs for Candidate A into our fire pit (I may have offered them money). Friends have shared that they, too, support Candidate A or B, and it's opened up conversations about race, the pandemic, the economy, our children, the toxicity of social media.

Conversations. Not screaming matches. Not division. Not all the ugliness the other party says the other has spawned.

I went inside and called Chuck, who agreed to help me take down some of the signs. I put the knife away. I welcomed my son home from school. My 13-year-old son, whose Instagram feed consists of his female classmates proclaiming their political activism with air kisses and their cleavage — Jesus Christ, ladies, can't we do BETTER? — listened to my crazy tale and promised to help us take down all the signs after Nov. 11.

And now here I am. Counting down the days. I mean, the leaves. 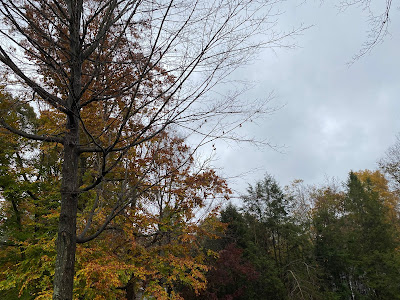 Email ThisBlogThis!Share to TwitterShare to FacebookShare to Pinterest
Labels: both parties have their drawbacks, presidential election, USA, vote, voting

There's an election coming up. Maybe you've heard.  I really haven't broached politics on this blog, except for the time the k...